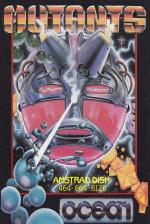 The ship in this game is called the "Rainbow Warrior". Could this be coincidence? Or are the programmers members of Greenpeace or the French Secret Service? The game has nothing to do with ships being blown up in New Zealand, so let's presume it's the product of a warped mind.

The whole thing does in fact take place in space, where you have to collect a component from each of fifteen zones and assemble a self-destruct mechanism in the sixteenth zone. In each of the fifteen zones, there is a different breed of alien mutation that has to be overcome in order to get the component.

You can choose to take one of three weapons into a zone: missiles, barriers or photon torpedoes. Missiles are fired one at a time but have an effect over a large area. Barriers have no effect on you but the mutants can't pass through them. Photon torpedoes are rapid-fire and just like any other bullet.

The mutants come in various guises: spheres that create a deadly web, clouds of particles, boxes that release swarming spheres and several other nasty problems. Some can be dealt with only by a specific weapon, while others can be passed with a prayer and flying by the seat of your pants.

It's a very intriguing game that is initially fascinating to discover. However, some of the zones just aren't up to scratch and show strong signs of having lost something in translation. The graphics are also disappointing; mostly drab and simple in design. A truly average game.

Graphics 56%
P. Some mutants are interestingly presented.
N. Most things are dull and simple in design.

Staying Power 52%
P. Tricky getting all the components.
N. Some zones are too similar and too easy.

Overall 54%
A disappointing game with a good idea.

A disappointing game with a good idea. Some zones are too similar and too easy.