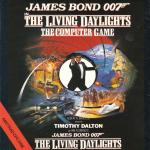 The first Bond game two years ago, View To A Kill, was hardly an auspicious affair. All the more reason for Domark to get its second one right and it looks an awful lot better. I haven't seen the film so I don't know how closely the game relates to it. But that's a good thing: judge the game on its own merits, not the film's.

The game is split into eight sections, each representing a location from the film. You have to fight your way along the right-to-left scrolling levels, facing different dangers on each. You can jump and do forward rolls as you stand or run. Moving the joystick left brings a cursor onto the screen - it acts as a sight for your gun or any other weapon you're carrying.

The first location is Gibraltar. You're supposedly enjoying a harmless test of skill against the SAS. However there's an enemy out to kill you. SAS men pop up in the background scenery and shoot at you; you have to jump over rocks in the foreground that will otherwise trip you up. At the end of the level is the enemy you have to shoot, and then you can progress to the next level.

A strength gauge goes down as bullets hit you or you bump into or fall over things. When it reaches zero you lose one of your five lives and have to start the current level again Strength can run out very quickly, so you always need to take lots of evasive action to stay alive.

At the end of the level a screen representing Q's laboratory appears. Here you can choose one of four weapons or objects to carry in addition to your ever-present Walther PPK. You have only a short time to decide, and only one of the objects will be of real use on the next level.

The objects vary from night-glasses and a hard-hat on the defensive side to bazooka, missile-firing pen and ghetto-blaster (rockets rather than rock) on the offensive side. Some weapons can be used only once; others will be in continuous use once activated.

On the second level you're joined by Koskov, a KGB defector, who will follow you through the remaining levels. On the third you have to jump over and duck under pipes while men on gantries throw things at you. Next comes a very tricky level where a milkman throws deadly bottles of gold-top at you at the same time as a helicopter bombs you. After that it gets even tougher with a fairground crook floating lethal balloons at you.

The scrolling backgrounds are nicely done, and so is the animation of Bond and some of the other characters. The action is a bit stop-go at times, but there's always something to do - either running and avoiding or shooting. There are some good elements of the Bond music on the title screen and between the levels.

I enjoyed this latest Bond game. It's got plenty of action and difficulty. My main criticism is that with most of the characters who pop up out of the scenery it's impossible to avoid their bullets, and therefore the element of skill is diminished. The Living Daylights is not a classic by any means but should provide plenty of entertainment.

Control can be frustrating, spoiling the otherwise lovely animation of Bond. But the whole game has been well designed and is a pleasure to play. Plenty of action and masses of variation.

Sonics 66%
P. Some good bits from the theme tune.

Staying Power 65%
P. The levels get tough.
N. The action is a bit stop-go and can all be over very quickly.

Overall 68%
P. Much better than the last Bond game.

Not a classic by any means but should provide plenty of entertainment... Much better than the last Bond game.