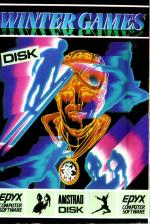 Sporting simulations will always be favourites amongst computer owners and the software houses are happy to supply them with a varied and ever increasing range of choices. This latest from US Gold recreates seven events from the Winter Olympics and features some amazing alpine attractions on the game screens.

The seven events are bobsleigh, hot dog aerials, speed skating, ski jump, figure skating, free skating and biathlon. There are disc and tape versions that have all the events but differ substantially in presentation. The disc version has an opening ceremony and a less annoying loading system than the tape. The tape version loads only two events at a time and the biathlon on its own, which means you may get a lot of coding for your money but you also get a lot of long loading waits.

The game gets away from the heavy waggling idea of decathlon games and relies on skill and timing to do well in each event. The first two events on tape are bobsleigh and hot dog aerials. The bob-sleigh presents you with a split screen, the left side showing an overhead view of the sled's progress down the course and the right one a view down the course from behind the sled. The action involves steering into corners so that the sled doesn't overturn while trying to take the quickest line down the course.

Speed skating and the ski jump come next. Speed skating pits the player against the computer or another player. The skater is viewed from the side and controlled by rhythmic joystick pushes for each push with a skate. The ski jump takes place on two screens. First the jumper skis down the slope and has to be jumped off the end. then controlled in the air to get as much distance as possible but in good style with a clean landing.

Figure skating and free skating are very similar, presenting the player with complicated jumps and spins to perform. The skater is viewed from the side on the screen and skates along a seemingly end-less rink. In figure skating seven manoeuvres have to be performed in one minute and as cleanly as possible, while in free skating you have two minutes to perform each manouevre three times. Marks are deducted for falls and awkward moves.

The biathlon is last and combines and endurance skiing event with rifle shooting. You have to ski up and down hills and on the flat using rhythmic joystick strokes as fast as possible. At intervals five targets will appear which have to be shot to avoid a time penalty. While skiing your pulse rate goes up - the higher it gets the harder the targets are to shoot.

The screens for each event are superbly drawn and although there isn't always a lot of action what there is has been well thought out. The gameplay itself is very enjoyable and for some of the events demands plenty of concentration and skill.

Happily this shouldn't ruin too many joysticks but it will sharpen up your timing no end. Disc users will be spared the frustrating loading system but will have to pay £5 for the privilege. It's probably US Gold's best release, and will have you playing around in the snow all summmer.

This is the way sports games ought to be - no waggling, no joystick-mangling, just skill. With the possible exception of the bobsleigh, all the events are challenging and interesting. Add to this the picture postcard scenery and the nicely handled music, and you've got one great game - unless you buy the tape version, in which case you've got four not-quite-so-good games.

Loses a lot of the scenic interest, but at least you won't get snow-blindness.

Disk version has seven exciting events, and excellent gameplay with some tough events. Tape version is a nasty multi-loader.