﻿ Mr. Weems And The She Vampires (Piranha) Review | Your Sinclair - Everygamegoing 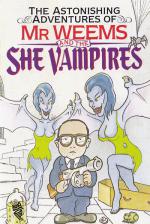 Having had enough of vampire jokes (my brother was always prone to Christopher Lee ones) it was with great reluctance that I accepted this. Was it courage? Was it trepidation? No, it was the Ed saying "Oh grow up you twonk, it's only a game!" Taking no chances, however, I loaded the program armed with a steak, garlic and some seasoning on the side. (Steak? Are you sure about this? Ed.) But I ate these before starting the game. Suddenly, out of the corner of my eye I swear I saw something at the window, and as the window started to open I felt something creeping up my...

Whoops! Sorry about that, I got a bit carried away. Mr Weems And The She-Vampires is a Gauntlet-style game by the RamJam Corporation, the company responsible for such games as Valkyrie 17, Panzadrome and Explorers. It's mainly single coloured, with flip screen instead of scrolling, which would surely have ruined the colours had there been any.

You control the bespectacled Mr Weems as he travels through six levels picking up various things and wiping out everyone in his way. He's supplied with a garlic gun, so he can dish out exorcisms St Rambo-style, and a garlic pill which makes him immune from attack for a while. He can also turn vampy himself, and his strength is restored by various blood bottles littered around the complex. Garlic bombs kill everything within a certain radius, but not the big She-V herself, oh no. For that you need a mallet and a stake, a cross, a mirror and a very large piece of garlic. These are dumped around the six levels, and are usually well guarded. Once the She-Vampire's been scratched out, you have to skedaddle fast, before her minions catch on that something is wrong and go out (literally) for your blood.

Weems is good fun, even if its colour scheme occasionally strains the peepers. It's very much in a well-worn formula, and so slightly overpriced, but if you have a taste for blood, it might be a game to get your teeth into!

A nifty chasearound in the Gauntlet mould. Fast, furious and heavy on the garlic.

A nifty chasearound in the Gauntlet mould. Fast, furious and heavy on the garlic.