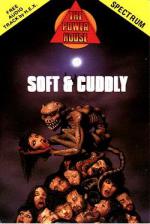 This is a very sick game indeed, but fortunately I have a very sick sense of humour. It's written by the creator of Go To Hell (a game out a couple of years ago which I moved heaven and earth to get), and like that it's great fun. Although my reviews of Power House game in the past have never been very complimentary (You mean downright hostile. Ed), I love this one. Not even the howling of Wayne Allen's HEX 'music' can dampen my enthusiasm.

It's an everyday sort of scenario. Your mum, the android queen, has been damaged (well, pulled to bits, actually), and your dad is locked in a fridge, so you travel around the screens looking for keys, which you give to dad in exchange for info on where mummy dearest is.

You fly around thanks to a jet pack, and can even turn invisible. Realistic, huh?

There are eight keys to collect, and eight bits of dear ol' mom, which you must then sew together. There are also loads of massive grotesque creations waiting to gobble you up, and John Jones is clearly infatuated with a skull wearing a beret (weird). What's more it's the first game I've played where you're asked if you want a silly walk or not!

It plays smoothly too, so if you're the sort of person who laughs when others cringe, buy it. It's your kind of game!

Platformy chaseabout with a difference - warped minds have been at work! Pass the sick bag, Alice!

A platformy chaseabout with a difference - warped minds have been at work! What's more, it's the first game I've played where you're asked if you want a silly walk or not!