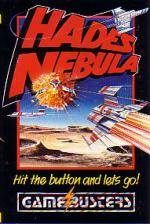 The year is 2124, and it isn't a good year. The Bromley Colts lost the FA Cup, and everything is either running down or running out. The boffins at WEC (World Energy Committee to you) have formulated The Plan (dan dan dan) to fix the problem. They've decided (after a lengthy session down the Dog And Duck) that the solution is to send ten massively enormous space craft to various parts of the universe to hunt for energy...

Well, when was the last time some cockamamy scheme like that succeeded? There's usually some baddy who likes nothing more than putting a spanner in the works, and this is no exception. The baddy this time goes by the name of the Emperor Hades. From his fortress on Sodini, he sent forth a mighty space armada, their one task - to wipe out the ships, send the crew for slaves and sell the scrap to 'Onest Joe for a tidy sum.

Nuff said. The plan worked, but one ship survived. And this is where you come in, 'cos the ship needs your help...

This is a shoot 'em up in the good ol' Lightforce tradition, though I rather think that game is a smidgin better. Not in the graphics department, though, 'cos Hades Nebulas graphics are great. No, the thing that's gone is the speed. The game is so slow that all the enjoyment's been taken out. You can dodge the baddies with ease, thereby giving you a fairly easy run through the game as you pursue the elusive high score.

It's not so bad, though not so good either. Another standard shoot 'em up, nothing to write home about, but something to pass the time with.