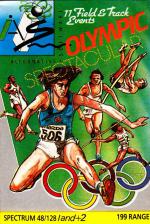 Oh dear. Oh dear oh dear oh dear. I thought Tomb Of Syrinx was bad, but this beats it hands down. Olympic Spectacular is a Decathlon-type collection of eleven track and field events that turns out, gasp horror, to be a reissue of Database's Micro Olympics, a whiskery old sportsim which wowed your gran back in the 1890's. Granted, there are eleven events, but all are substandard. The game is keys only, so there's no joystick waggling to liven things up. Oh, and the 'instructions' are supposed to be on the screen. NO THEY'RE NOT.

On all the throwing bits, you're given the numbers 1 to 4, and nowt else. After fruitlessly fiddling about with the keyboard, I eventually worked out that by pressing these buttons, the figure (if you can call him that) moved a bit and then threw his implement about eight feet. (All the throwing events were exactly the same.)

Next, the races. Here the computer doesn't follow your runner, but its own. I found and over again that my little man quickly disappeared off the screen, never to be seen again. (Good job it wasn't the hurdles - we're joyfully spared this.)

Yes, it's just awful. Highlights for me included choosing the keys and switching it off. I can see why they changed the name - in an Olympic race, it's a non-runner.

Dreadful sportsim - the worst game since EastEnders. A complete non-starter. Highlights for me included choosing the keys and switching it off.