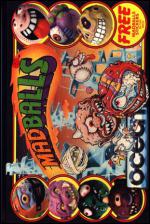 How about this for weird! A game license based on a totally nutty range of kids toys. Madballs are horrible squidgy little lumps of plastic that can be bounced around, or filled with liquid, each one having a different face and character (any resemblance to this reviewer is totally coincidental).

After a couple of games I discovered why the title Madballs was chosen - the gameplay is so frustrating that it leaves you in a fuming, angry, hair-pulling state yelling "SPHERICAL OBJECTS" at the top of your voice! Not that Madballs is a poor game - far from it. After sticking at it for hours on end I began to get somewhere and finally sussed out enough details to jot down this review.

The ultimate aim is to become the top ball, and this is done by bouncing other Madballs into a goal. There are eight balls to collect. Each has a different character and power/energy levels. Once captured, a Madball can be swopped for the one you are controlling, by leaping over an empty dustbin (don't ask me why! I'm only playing the game).

Madball land is made up of several oddly shaped platforms with scenery that can either help or hinder you. Things like ramps or pyramids either slide the ball into more danger, or give it a nasty pain in the urals. Trampolines and catapults give your balls extra elasticity which can bring a tear to the eye at times. So watch out fellow ball bouncers.

I quickly discovered Madballs was another version of an old Mastertronic game Motos, but with knobs on. Simply (simply - that's a laugh!) knock the other inhabitants of Madball world off the beaten track and proceed to the next level. Easier said than done. Controlling your balls (oo-er) is very, very hard, especially when the bureaucrat balls lay into you. But I feel this works in the game's favour. You just have to find out what's around that next corner, so you'll press the 'new game' button without thinking.

I enjoyed Madballs, even though I smashed three joysticks in the process. Maybe the graphics look a little washed out, but when you get into the game that is hardly noticeable. The scrolling gets nine out of ten, the sound, a feeble three. The only major drawback I found, was not being able to squash the chickens that made the Commodore version even better to play! It's weird, it's freaky. It's the most frustratingly addictive game I've played all month. Nuff said!

It's the most frustratingly addictive game I've played all month. Nuff said!