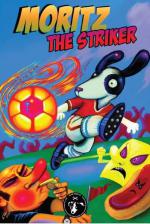 Moritz The Striker is the first game I've seen from Sebastian Braunert, a fairly new programmer on the thriving Spectrum scene. New games for the Spectrum seem to be being released practically every day at the moment and the 'reviews' that accompany their release are sometimes a tad over-exuberant. In some cases (Aliens Neoplasma, Drift, Valley Of Rains), the amazement at what has been achieved is justified; in others, such as this, you see the game being applauded on Facebook, IndieRetroNews and everywhere else, you download it and you wonder what all the bloody fuss is about.

Moritz The Striker is a platform game with a football theme and starts with a very impressive rendition of You'll Never Walk Alone, a bit of Here We Go, Here We Go, Here We Go and some sampled speech. In fact, it's only when you commence the game proper that things take a sharp turn for the worst. All those glorious intros are replaced with, well, um, some blippy notes and a platform game that looks like something released on budget for £1.99 in 1983.

I do not follow football so I readily admit that some of the charm of this game may have gone completely over my head. However, the real problem is that I don't understand what you're actually supposed to do in the game itself... and for a simple platformer that's not very good at all. The instructions state that the aim of the game is to get the ball, knock over a flag and then kick the ball into the goal. That sounds simple enough, and there's a ball bouncing away in the corner of the screen. So I set off in typical platform style, jumped the patrolling nasties, collected the ball and made my way over to the flag. Nothing happened.

Now I actually don't remember anything about knocking over flags in football... Maybe it's a new rule they've added recently.

Still, a bit of key pummelling later and Moritz kicked the ball, the flag fell over and I somehow completed the level... without going anywhere near the goal. At this point I was thoroughly bewildered. However, screen two has no flag at all (!). On this screen, the ball is locked in a safe that can only be opened by pressing a switch at the top right. But how you proceed after that is anybody's guess.

Apart from the patrolling nasties, there are other 'figures' in the game. These figures hover above the platforms but do not move. Their effect is decidedly unnerving. They just look like they don't belong in the game at all.

Finally, the instructions suggest that you try a combination of the shoot and left control, or shoot and right control, to kick the ball. I assume that this is to get it 'past' the marauding nasties (opposing team players?) and into the goalmouth. However, in a 2D platform game with no sense of perspective, there is no on-screen confirmation of which way you have kicked the ball. After nine unsuccessful attempts or so at kicking the ball into the goal on screen two - and no idea of what I was doing wrong! - I flung my hands up in despair and reset the game.

Moritz The Striker left me not just baffled but pretty disappointed too. Maybe, if you really like football, and you really like following the exploits of Moritz, you might just be able to squeeze some fun out of it. But personally I think it will take a lot of effort.