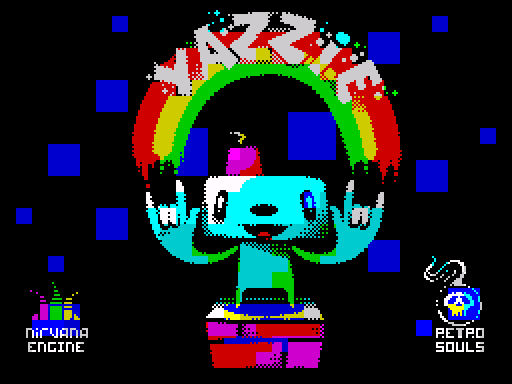 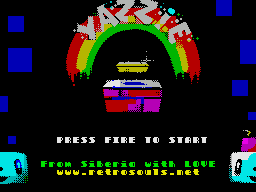 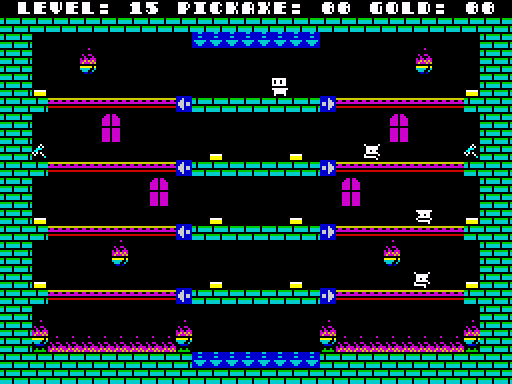 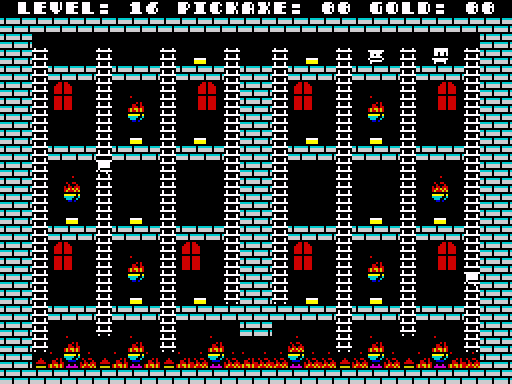 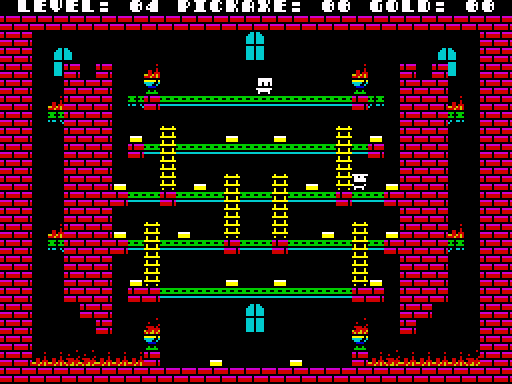 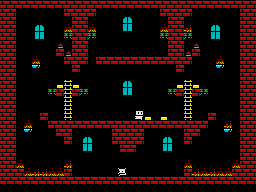 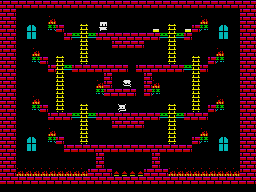 Oh, this is a good 'un. I haven't had as much fun with a Spectrum platformer since the day I discovered Alter Ego: Dreamwalker (I think it's three years old now...!). Yazzie is one of those great platformers where each screen is a puzzle, and each screen gets steadily more difficult. In the case of Yazzie, the task is to clear each screen of all the gold bars it contains. Immediately you pick up the last one you win, no matter what danger you have to put yourself in to do it.

The ladders-and-levels format is something everyone knows and Yazzie is played from the side-on with certain levels consisting of bricks and, occasionally, 'different'-looking blocks. These often have magical properties that need to be utilised to complete the particular screen. Green platforms you can do down "through"; arrowed ones likewise and some switches trigger bombs which blow apart the surrounding scenery, whilst others create platforms out of thin air.

A platformer's not worthy of the name unless there are some roaming nasties to avoid, right? In Yazzie, the nasties are quasi-intelligent and have a cute behaviour pattern of wandering around aimlessly, then suddenly stopping, "thinking" and homing in on you for a while before they revert to wandering around aimlessly. Keep a wary eye on them on your quest for gold bars; colliding with them equals death.

Not that death is such a drag in this game actually; you seem to have infinite lives and there's not even a password system. It's just play and play until you've had enough. The main character is extremely responsive and whenever a wall bars your way to one or more of the gold bars, you'll find a bit of brainstorming will allow you to devise a route through the screen that takes you by the (necessary) pickaxe(s) you'll need.

The sprites are a bit simplistic but they animate nicely. I do have to dock it a few points though for having a main sprite which is so incredibly similar to the enemy sprites. When you encounter a level for the first time, it's hard to know which sprite is "you" until you actually move a few steps. Surely they could've given him a hat to wear or something else to make him distinguishable? The 128K version of the game does have music too but, surprisingly, it's actually not much cop - just a relentlessly plodding drum beat without a real tune.

Nevertheless, this is a taxing little game - those who loved Endless Forms Most Beautiful will adore it, as will Denis Grachev fans who are looking for a game in somewhat similar style. It's all topped off with a groovy loading screen too. Cool!