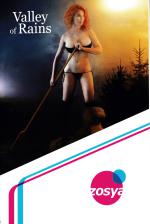 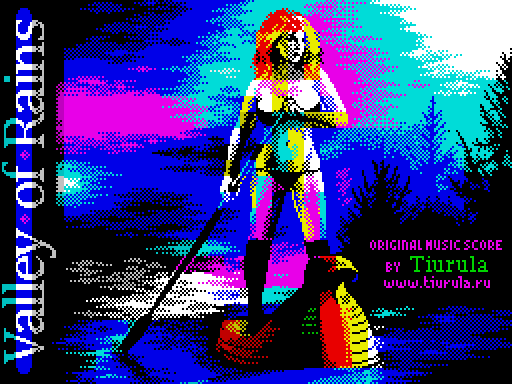 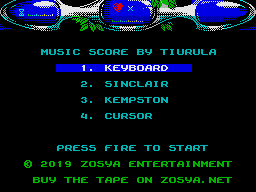 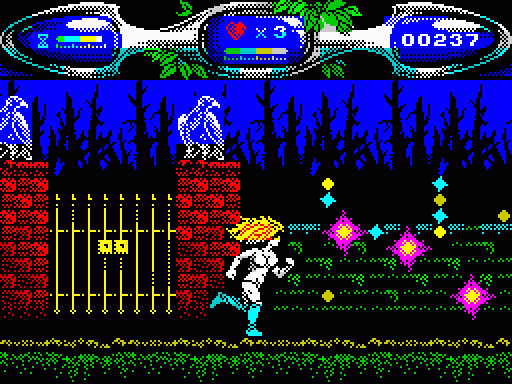 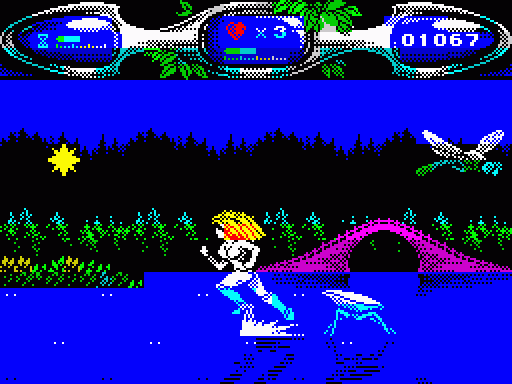 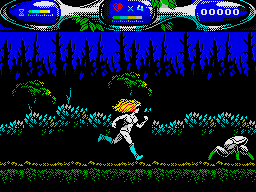 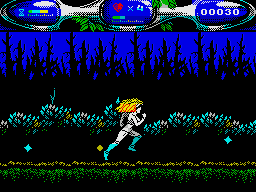 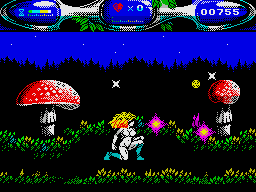 There are few retro machines that get as much love these days as the Spectrum, and Valley Of Rains shows there's plenty of life left in the 128K variant. It's a game that reminded me a lot of the original Shadow Of The Beast - huge sprites, imaginative backdrops, themed levels and big boss fights. Unusually for the Spectrum, Zosha.net has been able (somehow) to create all of this is bewitching full colour, and has chosen to dispense with any sort of backstory in favour of a more lyrical intro.

Your task is to "bring life back" to the Valley of Rains. Which you achieve by, of course, wiping out all signs of it. Bats, snakes, mutant totem-poles, crawling arachnids, birds and countless other nasties are all here for the blasting and they home in on the heroine relentlessly as you plough through the themed stages. It's a 'run and gun' style game which thunders along at a fair old pace and, in fact, it's pretty miraculous that it manages to keep such a pace up on the Spectrum, let alone manage it without colour bleed and without fluxuation.

Well, it just keeps on surprising you. You can call me an old cynic, but it's been a long time since I played a Spectrum game that wasn't just a variation on a theme. In fact, the last game I played on a 128K Spectrum that genuinely kept on surprising me throughout was Ghouls 'N Ghosts nearly thirty years ago. Most games are guilty of giving up their secrets pretty quickly, aren't they? When you're on a system with just 128K to play with, and no multi-load, I imagine that an hour is going to be about the limit for surprises, and with many games on this system, you've got their number within a few minutes.

Valley Of Rains is innovative in a whole number of ways. Firstly, because it doesn't give you full instructions, you might first choose to play it tentatively. It's fairly evident that you progress by running to the right, and the level scrolls keeping the heroine in the centre. As nasties scroll into view, you can run away from them in order to fire at them, hopefully taking them out without their talons piercing your skin. However, there's also a pretty tight time limit to each stage too, so you have to get the balance right between stand and/or retreat.

Each time you wipe out an enemy, he may, if you're lucky, leave behind a bonus item which, when picked up, will change your weapon, extend the stage time, increase your energy and/or something else. The array of weapons you can collect range from the puny one shot that you start with to fireballs which rebound all over the screen. This element of randomness makes for a very different game with every attempt. It's one of the elements that made R-Type so popular back in the day; when you get a weapon upgrade you can be more reckless when charging into danger as the baddies don't stand a chance against the superior firepower you possess.

Finally, Valley Of Rains is not the linear experience that it could have been, due to the action being punctuated by big boss fights. In most games, the regular nasties of the game honourably back off whilst you deal with these more terrifying menaces but not so here. They all keep right on coming whilst the demons whip and twist around the screen. You'll have to concentrate very hard in the boss and bullet hell that ensues.

Frankly, this is just brilliant; pure adrenaline for the eyes, ears and other senses. It's not easy either, and it's all so wildly unpredictable that it's very addictive. If there is a flaw, it's only that sometimes you don't get any time extend bonuses and sometimes you do. This means that some run-throughs of some stages can be much tougher than others, and perhaps even impossible.

A real winner in all respects, Valley Of Rains swept the board at the Yandex Retro Games Battle 2019 and a physical release, complete with a background soundtrack CD is promised in late 2020. I'm going to cheat a bit by not marking it down for sound (it has a theme tune on the title page and in-game effects) in those circumstances; you can just tell that with the quality of everything else, the soundtrack is also going to be of a high standard.