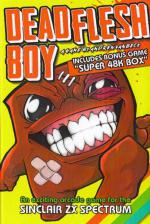 There's plenty of death in the average arcade platformer, but there's rarely any gore associated with it. Dead Flesh Boy is a take-off on the PlayStation 4's Super Meat Boy and puts you in control of a little boy who you'll quickly find yourself smearing over countless circular saws, spikes and other weapons of torture, no matter how hard to try not to.

The "dead flesh boy" of the title stands about sixteen pixels high and is very hard to control. Moving him left and right takes him from a leisurely pace to a very quick one in less than a second, and jumping sends him in logical arcs according to his velocity. You can not only change direction in the air, but also reduce speed by doing so, making the game mechanics a mad, somewhat unpredictable dash about.

Littering the screens are lots of tools which will cause your demise - very quickly - splattering red blood pixel matter all over the platforms. Likewise, when you run over certain surfaces you paint them red, presumably from previous injuries. This is one Speccy game where you have two different types of "colour bleed"...!

You have infinite lives and you can start at any of the twenty screens but that doesn't make the game easy. Some screens are harder than others, and one not immediately obvious feature is the ability to bounce up walls, as your boy has the ability to stick to them as long as you do not release the direction control. Hence, you may jump out, change direction and continue in to "climb" the wall slowly but surely. You need to do this a few times on some screens.

Dead Flesh Boy is quite a simple game really. There's no background music, just a jingle when you complete a screen, and the graphics are basic, although pleasant enough. With practice (or luck), you will be able to complete all twenty screens and there won't be a lot to draw you back afterwards. It's a bit more imaginative than your average platformer but, although there is some gore, of course it's not a patch on the gore of the most powerful console games it's cloned from.

Back in the day, Creatures and Lemmings made computer owners wince somewhat as cutesy characters suffered appallingly agonising on-screen deaths, but Dead Flesh Boy doesn't quite manage to elicit those twisted feelings of fascination and horror that those two games do. Sadly, I think it's just not quite horrible enough for me. Ahem, I mean for those disgusting sickos out there.

Overall then, a reasonable implementation of the splatterhouse blood and gore platform genre... but I do think a better, more bloody, version needs to be written.