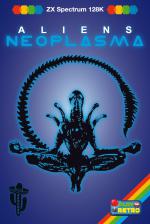 We're a bit late to this party, but Aliens: Neoplasma has certainly been giving a few Spectrum owners the chills as of late. Dave E checks out a platform game that's simply oozing atmosphere...

It's about six months since Aliens: Neoplasma was released and it's no exaggeration to say there's a certain buzz around this particular new Spectrum game. It's set, as you might imagine, upon a deserted space freighter. Deserted, that is, except for you and the facehugging, egg-laying aliens from a certain famous Eighties movie. And, unlike the interminable wait to meet the aliens of Alien: Isolation, here they're out in force from the very minute you start to play.

Firstly, there's no getting away from the obvious. Aliens: Neoplasma is... yet another platformer. However, it's no generic platformer. The level of care and attention that has clearly been lavished on it is second-to-none and, despite the aged hardware, it's a thoroughly modern game. By which I mean it adheres to modern game conventions such as 'guiding' the player through its early stages. It does so by the use of objects which flash as you run past them (indicating you should interact with them to advance the game) and by auto-saving your position as you make progress.

Perhaps its most impressive feature however, is just how crisp and smooth its animation is. The aliens really look "Gigeresque", rampaging maniacally around the ship and darting to attack you. The facehuggers drop from ceilings and scamper playfully over to you... before fastening themselves to your face and draining your energy in a split-second! When you move from one room to another it's not a flick-screen effect but a super-fast scrolling one. And when you get hold of the awesome weaponry and start blasting your foes, they recoil and judder in pain before collapsing into oblivion.

It reminds me very much of a game I particularly liked on the Spectrum in the Eighties - Navy Moves (Part II) by Dinamic Software. Aliens: Neoplasma is like a Navy Moves for a new era, with animation and graphics ramped up several notches. The background music is awesome too.

In fact, as per the buzz surrounding this particular game, there's not a lot here to criticize at all. There's a bit of attribute clash as you move around - nothing major, though - and the game demands one more key than comfortably suits your fingers - there's a jump control and a fire control, but also a grenade control. I got used to it fairly quickly though so again I don't think I can really mark it down for that. It's all really good, and even more surprisingly, it's even playable without an emulator...!

Yes, you read that last part right. Aliens: Neoplasma is one of the first new(ish) Spectrum games to have made its debut appearance on the site ZX Online (https://zxonline.net/game/alien-game/), a site which aims to increase the number of gamers playing Spectrum games by allowing the games to be played direct from a web page. There's even a very atmospheric (and somewhat Christmassy) trailer on there too. Brilliant.

Or, actually, brilliant-ish. Because, if there is one thing to moan about in relation to Aliens: Neoplasma, it's its manner of release. The game is, it appears, only available to download via ZX Online, which requires you to create an account and log in. At time of writing, all of the download links are broken, meaning you're restricted to playing it via the browser. That's actually not so brilliant because it means you can't use things like Save States to make progress, or pipe the file into an actual 128K Spectrum (It's 128K only, as you might expect!). Apparently, Sanchez Crew Software have chosen this route for a reason; they don't want anyone making non-official physical copies of their game because they're planning to do that themselves in the near future. That is, I suppose, fair enough, but it's a tad frustrating to those of us who collect Spectrum games. We can see this brilliant Spectrum game, we can even play it, but we can't actually have it on our laptop for offline play. Not so good, really.

I'm not going to mark it down for that either though because hopefully this situation is only temporary.

Overall, Aliens: Neoplasma is a great little platform adventure and you'd have to be crazy to pass this by, particularly because it's 100% free to play. It's deep, it's beguiling and it slowly reveals its secrets the longer you play. I wound up playing it for hours, simply because it's so beautiful to look at, and so engaging to play. Believe the buzz, and get playing it now and get downloading it as soon as you can.