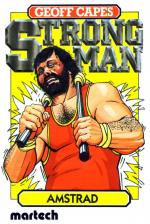 Geoff Capes has been Britain's, Europe's and the World's strongest man. Now he's out to be the strongest man on a micro against the likes of Daley Thompson and Brian Jacks. They are dwarfed by Geoff in real life, but what about the game?

It stars Geoff in six events where you have to first get him to the peak of fitness and then control his muscular effort through the event to complete his task within a time limit. You start with a frantic bit of joystick waggling or key bashing to determine Geoff's fitness. This gives you a percentage fitness which you should aim to get over 80 and 90 if you really get going. The waggling only lasts for five seconds though, so 1,500 metre stamina isn't needed. Thank goodness.

Once Geoff has got his strength up, it has to be disturbed between eight parts of his body. These are split into two sections, the upper and lower body, with particular muscles being used for each event but all of them being pink and hairy. After some practice you'll spot which muscles are used for which event and allocate accordingly.

Now you're ready for the first event - the lorry pull. Geoff appears tied to the front of a lorry with his head down like a bull about to charge. He doesn't do any charging through because that truck really takes some moving. Once the event starts, you have two things to control: the effort Geoff puts in and the muscles he uses.

The effort is shown on a percentage bar - the higher it is the faster the muscle strength is used up. The muscles are shown on either side of the screen and one at a time the boxes turn yellow, indicating which one is to be used. You move an arrow about selecting the muscles, turning the box green when you get the right one. If you get it right, Geoff starts plodding along in fits and starts dragging the lorry towards a line. If he crosses it within the qualifying time then it's on to the next event.

First you get to reallocate strength left over from the last event. This happens after every event and it helps to remember which muscles will be used next. The log chop pictures an axe over a log which you have to get through. It is made up of three different areas; soft, hard and knotted, and you have to find the weakest area. The axe moves left and right with its speed being determined by the effort bat. Pressing fire puts in a chop. This is probably the least interesting of the events both for gameplay and graphics - but don't tell Geoff I said so.

Barrel loading next and here Geoff really starts to get going, having to plod back and forth across the screen dumping barrels into a lorry. Manic waggling gets him to the barrel where he impolitely squats, poking his bottom in your direction, and you waggle again to pick up the barrel. Then you allocate muscles as directed to get him to the lorry again.

The car roll has Geoff throwing a poor, defenceless, Volkswagen onto its roof, whereupon the windscreen shatters. This is again done through the allocation of muscle strength and effort but if you make a mistake the car starts to roll backwards! The fairground bell is the fifth event: you don't have to ring it but just achieve a certain height by waggling to increase effort and pressing fire at the right moment to hit.

Last is the Sumo wrestling which is a tough event of timing as Geoff and another fighter squat in a circle and try to force each other out of it. This one can be rather frustrating and I'd have preferred a straight waggle, but it does offer a different challenge if you can master it.

Get through that lot and then you'll have to do it all again, only it gets tougher. It certainly has something a little different from the usual joystick bash but six events may prove limiting.

You don't have to have muscles like Geoff to play this game, but it would help. The waggling is not for the wake of arm or faint of heart, even if it isn't quite as furious as those old Decathlon games. The events are novel, and the graphics are not bad - Geoff is an unmistakable figure. I wasn't keen on the muscle icons though; they are pretty repulsive to look at. The main drawback to the game is the limited number of events, which may mean that fitter players will lose interest.

Quite a novel game... Certainly has something a little different from the usual joystick bash, although six events may prove limiting.