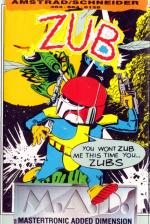 Not what you'd call the most intellectually stimulating game title - but then it's the name of the main character, the planet and just about everything else in the game. Your job is to get Zub back to Zub by way of ten planets and their teleport systems.

The game is superbly presented. A great title page gives way to a bogglingly original options screen: several menus scroll busily in simultaneous windows - a marvellous effect. Once you've read through that lot you can enter the game itself. You've got quite a straightforward task in concept, but it's difficult to execute.

As space-suited Zub, you appear on a planet surface and can walk left and right, and jump. Zub is nicely animated and the screen scrolls with him wherever you go. If you go too far left or right you run into a forcefield, blocking your way and draining your energy.

Above the ground are platforms just big enough to stand on - you can jump up on to one. Crouching down, you can then move the platform until it is underneath another or.e and leap up to it. Carry on doing that until high enough to be transported off the planet.

There is always more than one tele-porter platform, though; you'll have to experiment to find out which takes you where. You arrive on the surface of the new planet and have to make your way up to the teleporter again.

Your progress into the air doesn't go unhindered: security droids patrol each planet. These come down from above the teleporters and home in on you. They drain your energy when they touch you and try to knock you off the platforms. Energy drain is shown by an enlarged Zub at the side of the screen, which gradually turns into a skeleton - very tasteful.

A droia can be shot but it is immediately replaced by another, which will head down toward you. Bumping into forcefields can also cause you to fall off the platforms: you plummet until landing on another platform or the planet. This doesn't cost you energy, but it means a long way to go back up.

Sometimes after teleporting you get the chance to regain some power by collecting power pills. These can sustain you through long games.

Planets are all basically the same. They just appear in different colours and with a different droid. This means that despite the excellent presentation the game lacks in variety.

The graphics are good, though there isn't much except Zub and the droids. As for sound, there are two different tunes for the title screen and the game itself, the latter slowing down as you lose energy. Even so you may find them a little too hectic after a while. The gameplay is great fun to start with but you may soon tire of the lack of variety.

I found this game both highly addictive and very frustrating. No matter how hard I tried, I just couldn't get to level four. Some highly original concepts have been well executed. The melody makes me want to stamp my feet and adds to the overall atmosphere. At only £2 you'll not only stamp your feet, you'll leap sky-high.

P. Very well presented.
P. Good music on title screen and game.
P. Lots of fun to start with due to the character, music and task.
P. Quite hard to complete the whole thing.

N. Lacks variety.
N. Falling off when near the top and teleporting to the wrong planet can be very frustrating.

Despite the excellent presentation, the game lacks in variety. The graphics are good, though there isn't much except Zub and the droids.