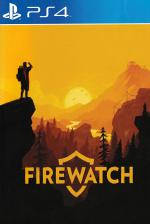 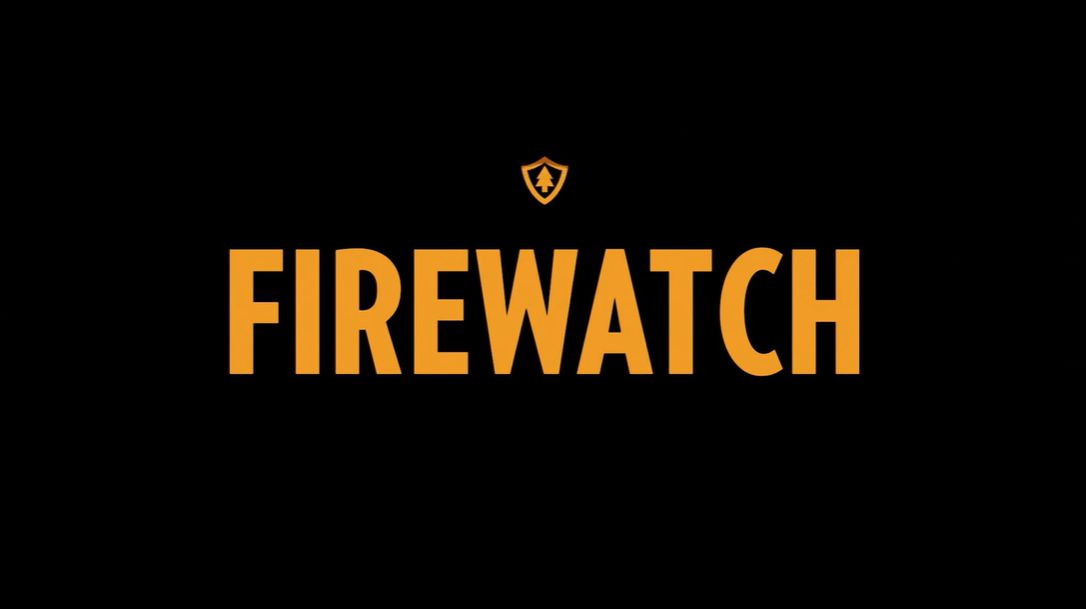 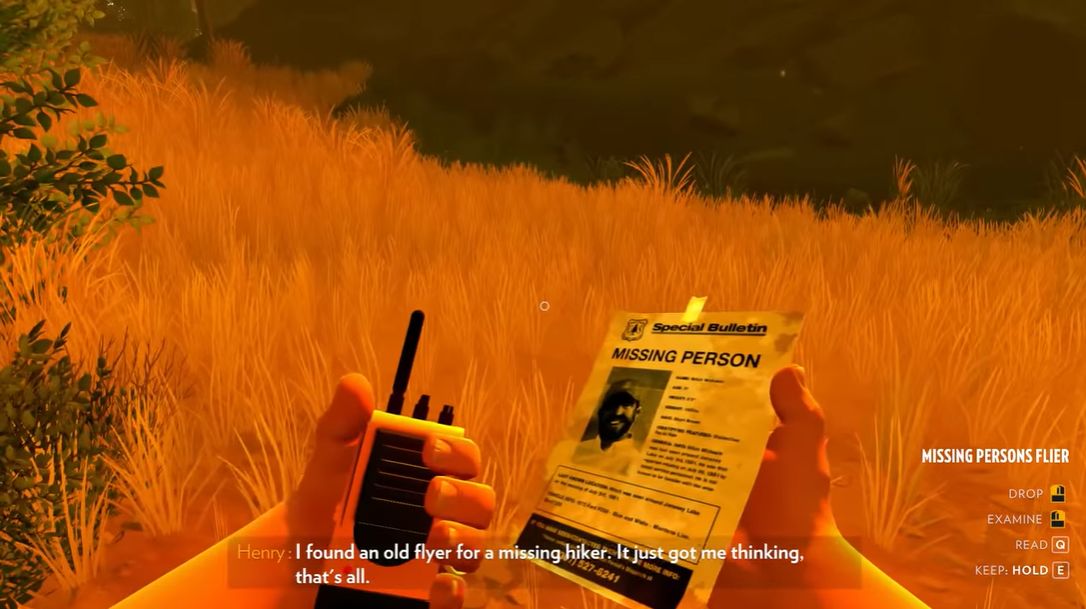 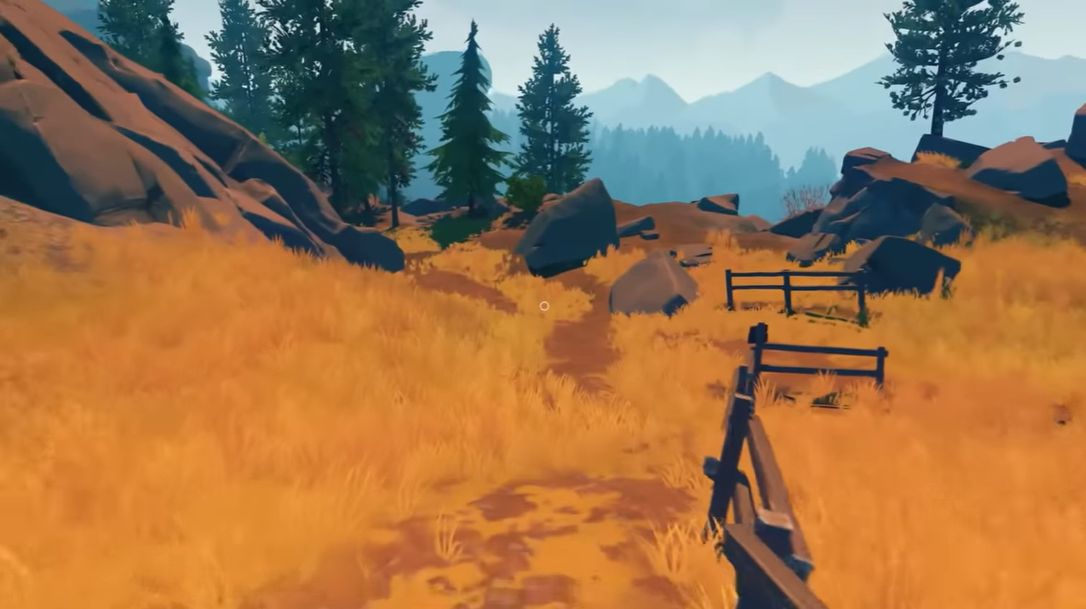 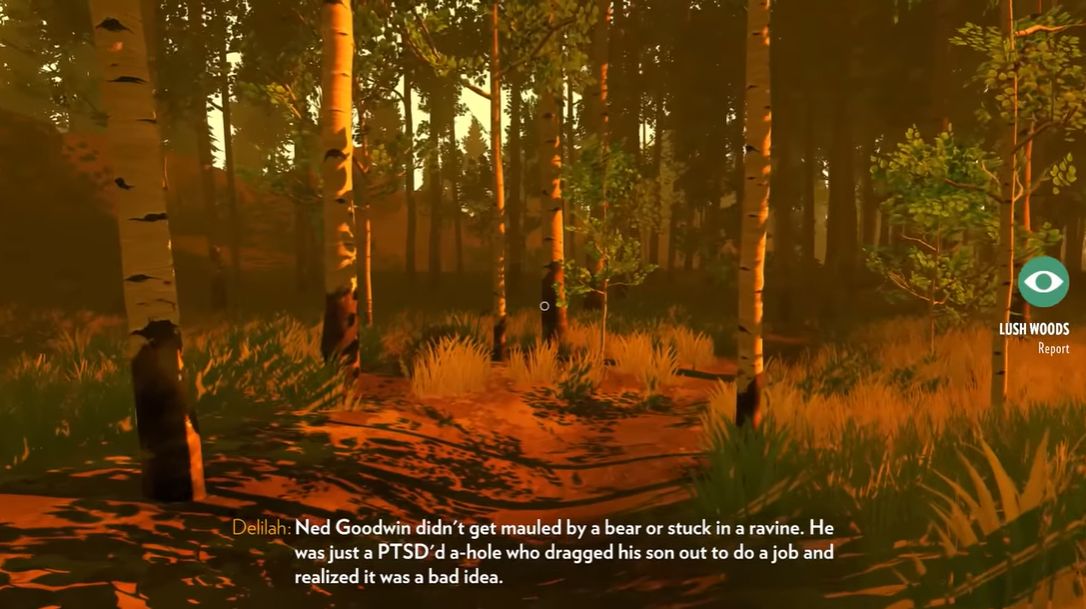 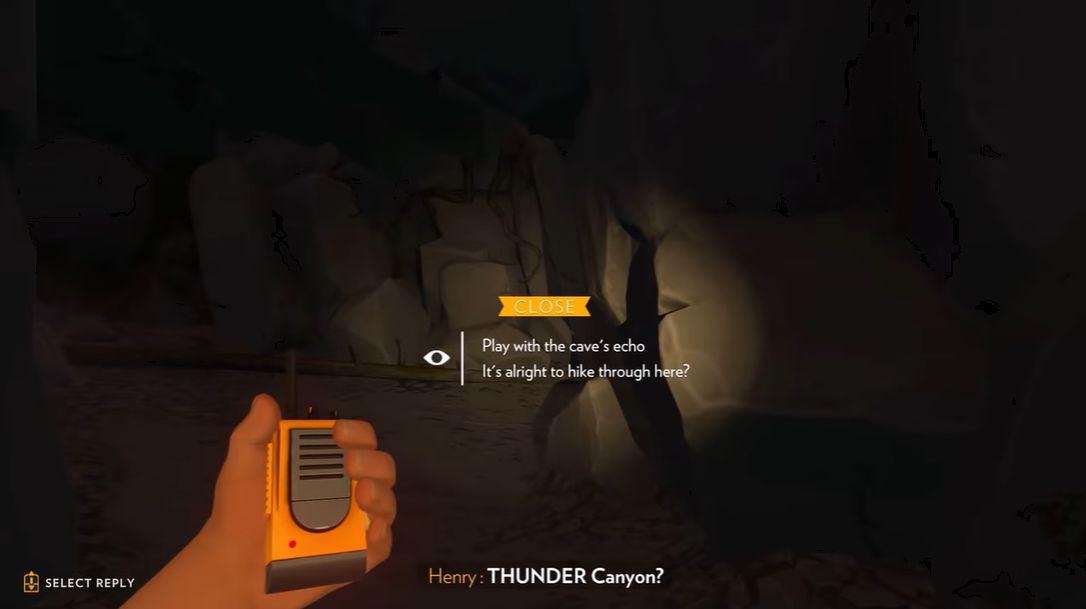 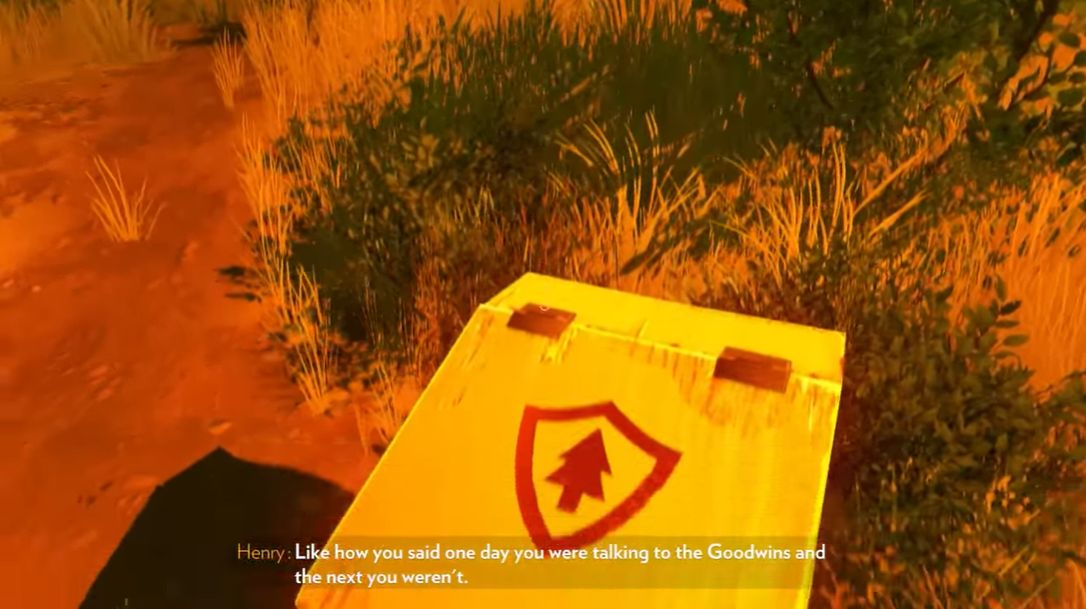 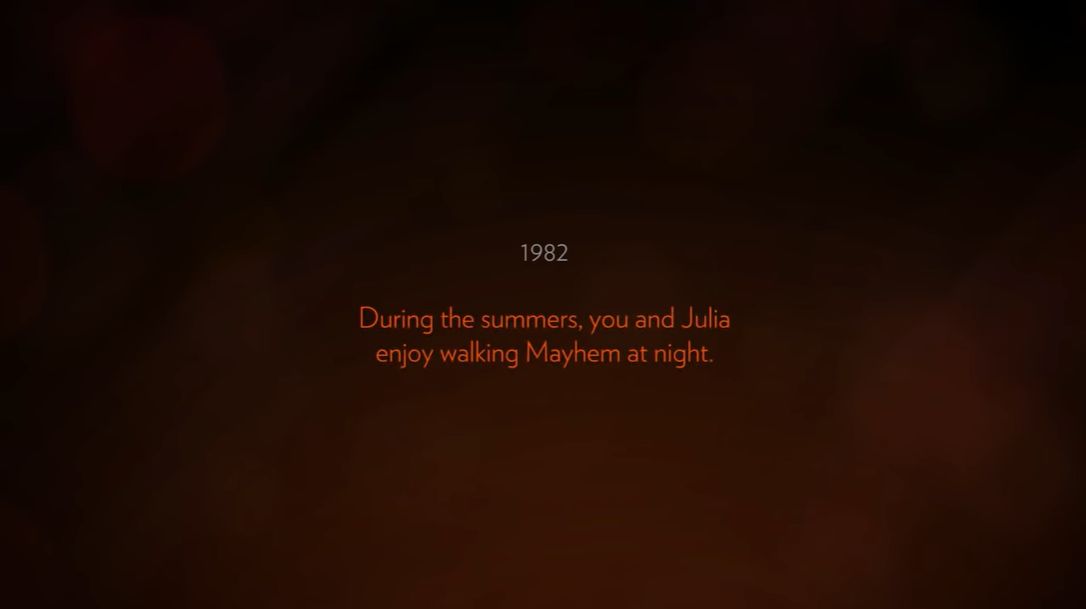 We all love a good mystery, don't we? Firewatch is a spooky number indeed, a game that manages to fuse paranoia, suspicion, foreboding and a powerful sense of dread into what should be the majestic wonder of nature. You play Harry, a married forty-something whose wife has recently been diagnosed with Alchezimer's Disease. In case you don't know what that is, it's an illness that destroys the personality, meaning that a sufferer forgets their life and becomes scared of the familiar. You're told Harry dealt with his wife alone for several years but eventually had to commit her to a residential home. You're also told snatches of the life they had together, including how they first met and a dog they bought together. This is done through a prologue which is a little like a mini Choose Your Own Adventure; however the small details that you choose affect the game itself, which genuinely seems to immerse the player more fully in Harry's world.

Onto the game itself then, Harry has taken a brand new job as a "firewatcher", which basically means he sits in a big wooden tower that can see the forests of Wyoming from every direction. Your job is to watch for fires, or to be on the lookout for anything that might inadvertently cause one of them. It won't be too much of a spoiler to reveal that there are several fires throughout the game. However, I don't intend to give chapter and verse on the many intricately-woven strings of Firewatch's plot because to do so would be to defraud you of playing through something altogether 'different'.

Firstly, Firewatch is beautiful. The mountains and environs of your new job are so tempting that you may well be persuaded to abandon the plot altogether and just wander them all day. Assuming you do take your firewatching duties seriously, however, well, you will probably have deduced that the 'alone' experience might not be exactly what Harry needs at this particular point in his life. And you, as Harry, you are alone throughout the whole game. Alone, that is, except for the disembodied voice of Delilah, the lookout in the neighbouring tower to you. She's there to warmly welcome you to your new commission, to crack the odd joke and to lob the odd insult your way, and of course to tell you what to do and where to go for the first couple of days.

The physical version of Firewatch comes with a foldout tourist map which can also be displayed on-screen during the game itself by tapping the Up control. A lot of the skill of playing Firewatch is learning how to navigate your way around the forests; other standard exploration elements are in there but are more optional than mandatory. For instance, you'll find a camera with which you can take photos, and a flashlight which might help you out in the creepy caves, but you're not required to use these. However, I'd be very surprised if you didn't get completely lost without the map and compass to help you locate the destinations to which you need to travel.

Frankly, your job as lookout doesn't seem to involve doing much. Whether or not there are real lookouts in Wyoming who sit in towers reading endless fiction books and drinking tequila, I'm not sure, but were the woods not invaded by feckless teenagers every now and again, an employee's job there would seem to be quite a dull one. However, Harry's life is soon far from dull, because he hears the voice of his wife over the radio, and is perturbed to find quite a few missing persons' posters pinned up around the area as he does his patrols. But... is it all really real? If he is alone, who is the mysterious figure he sees sometimes, silently walking the hillside with a flashlight? And was it really just teenagers who trashed his tower that second night he was on duty? Or is something more sinister going on in Wyoming?

There's a wonderful feeling of foreshadowing that pervades Firewatch. Like his wife, Harry may be going out of his mind. Perhaps his colleague and the national park are both figments of his imagination. The ease with which he swings about the mountains feels dreamlike and the handwritten notes that he finds in the supply chests littering the camp feel curiously other-worldly. My brain wanted to work it all out from the very moment I started playing and I played the whole thing right through in one sitting and came away pretty happy that I had accurately divided what was relevant to what was not. I also came away thinking "Curse you, Firewatch, that was too addictive by far...!"

Firewatch is amazingly enjoyable. Not being able to die, and not having lives or any energy bar, means you can take all the time you need to solve its puzzles. It does leave quite a few loose ends at its conclusion but what satisfied me more than the plot itself were actually the peculiar disjoints between everything Harry uncovers. Very often he will yell excitedly that he has found something nefarious, only for an examination of the thing in question to reveal it is actually something totally innocent.

I'm always impressed by games which attempt to do something completely new. Here, what we have is almost a new genre. The dangers in Firewatch are not visual. There are no shadow monsters, and no combat. Firewatch is not scary because of Resident Evil-style jump-scares; it's scary because Harry is sane enough to play, whilst also not-quite-disturbing-enough to be a danger to himself and to others. Whenever something happens, it could be for several reasons, and so the player can never jump to conclusions because there just isn't the evidence as to who is doing it, or why. Is it Harry? Is it his colleague? Is it someone else? And once you work that out, why? The mystery keeps the tension consistent, right up until the very final frames.

There are a few irks about the game. Firstly, as you explore the forests you are able to access more and more places, and stray further and further from the given trails. Whilst that's all well and good, when you are meant to discover something, Firewatch ensures you do indeed discover it by preventing you from leaving particular areas. When you discover the "den", for example, it is filled with items that you can examine and keep or discard. However, there are so many items that you may well miss the most important one - the one that you need to find to successfully leave the den! Secondly, I was initially very confused by the ability to link a rope to a tree-stump in order to climb down a rock face. I had the rope, I walked up to the stump, a little message told me to press R2 but, when I did, nothing happened. The message seems to be slightly greyed out as if I couldn't do it yet. I retraced my steps, went around and around in circles trying to find a different rope or an item I hadn't yet found... only to discover that the problem was that you have to have your back to the cliff-face for R2 to work. Thirdly, there are some spelling and grammar mistakes - not hundreds, but enough that they annoyed me.

Overall then, this is one of the best PlayStation 4 thrillers I have played. It's probably not a game you'll return to after you've completed it, because it only has the one ending, but I struggle to see how it could be any more perfect in its execution. Get it now.