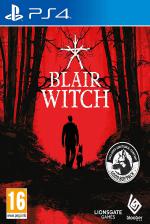 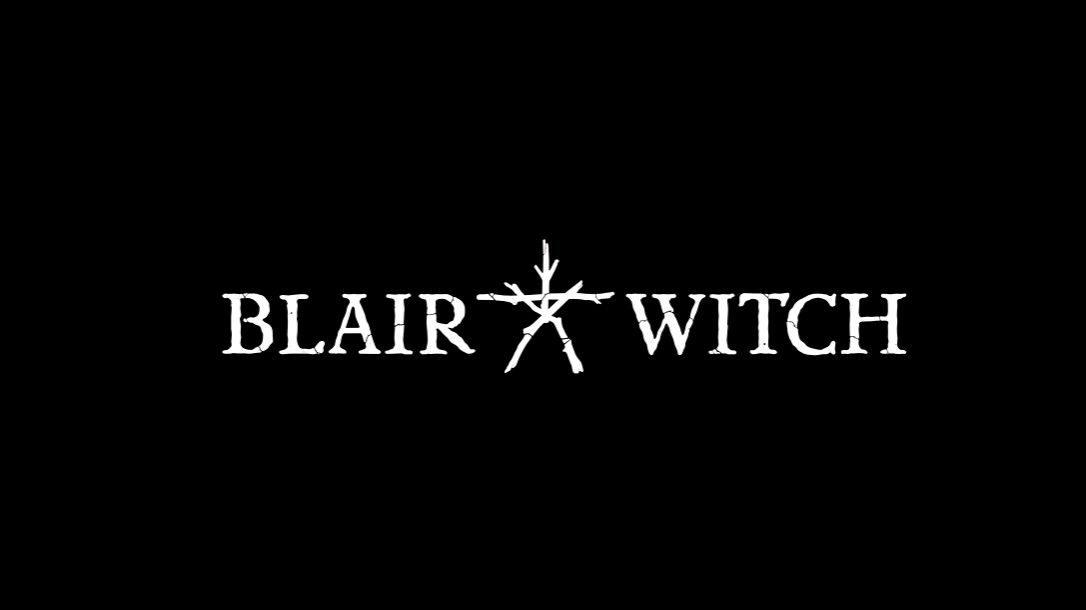 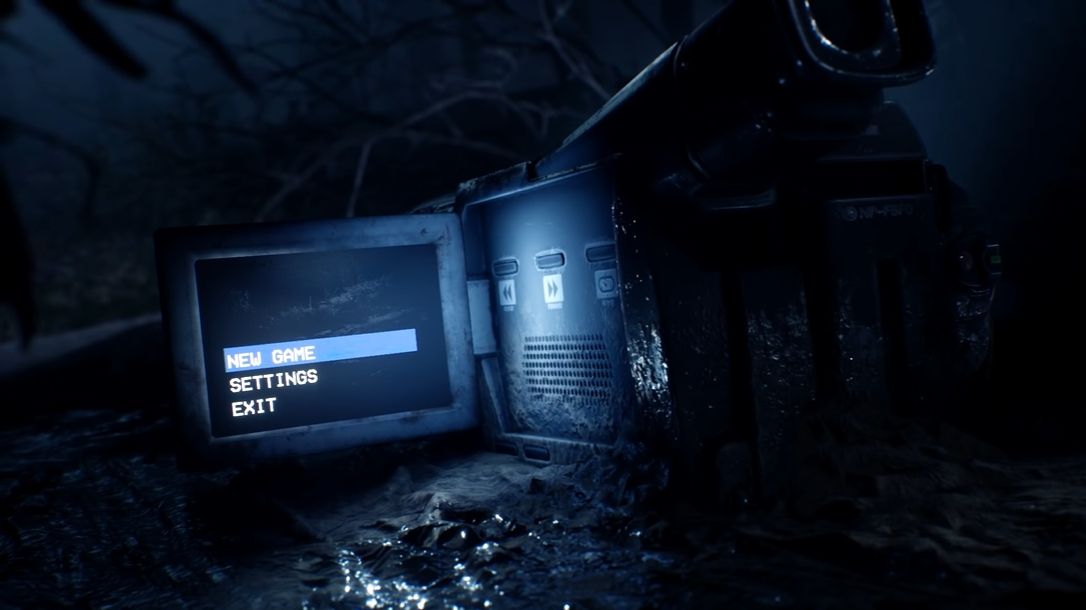 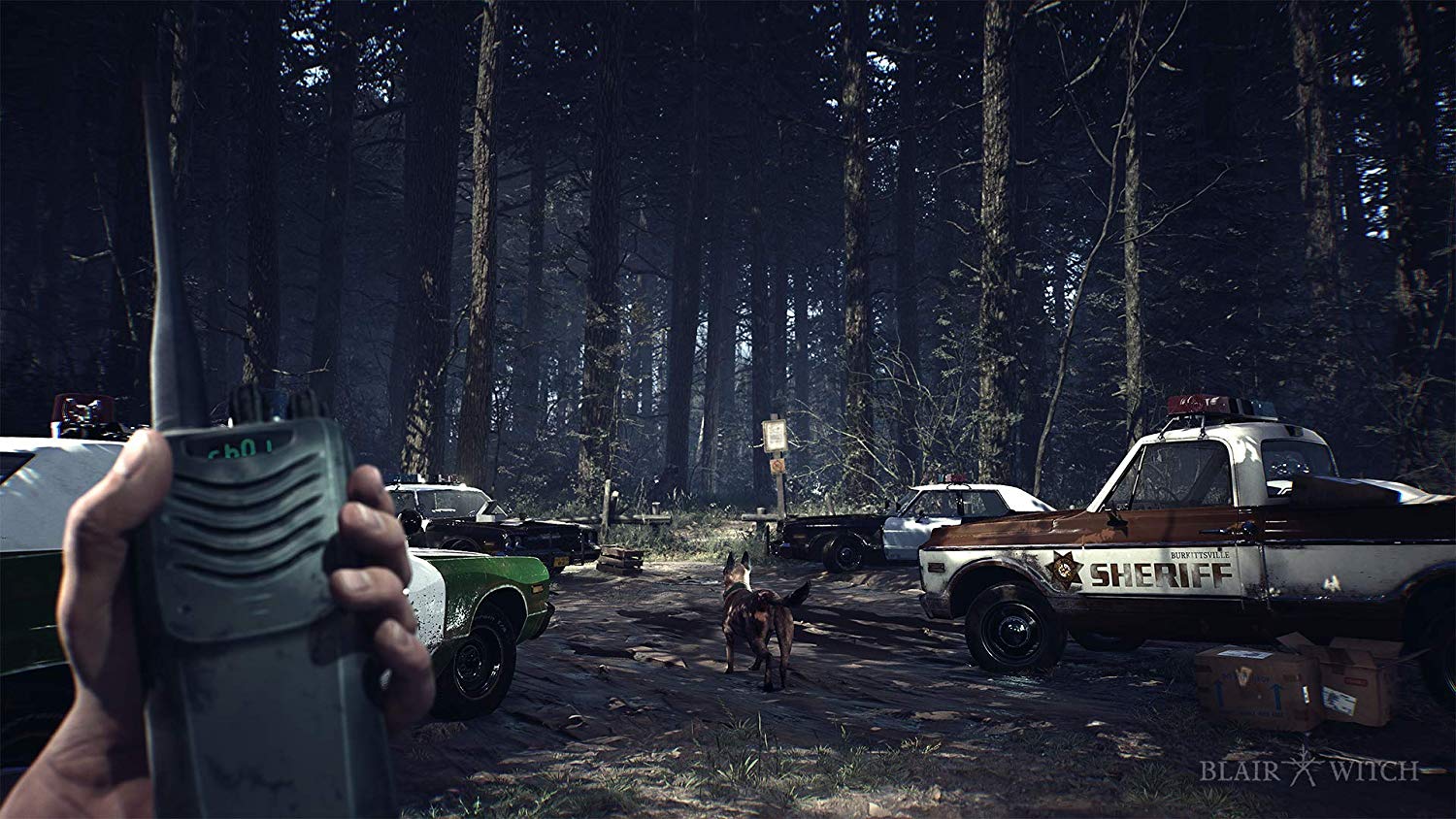 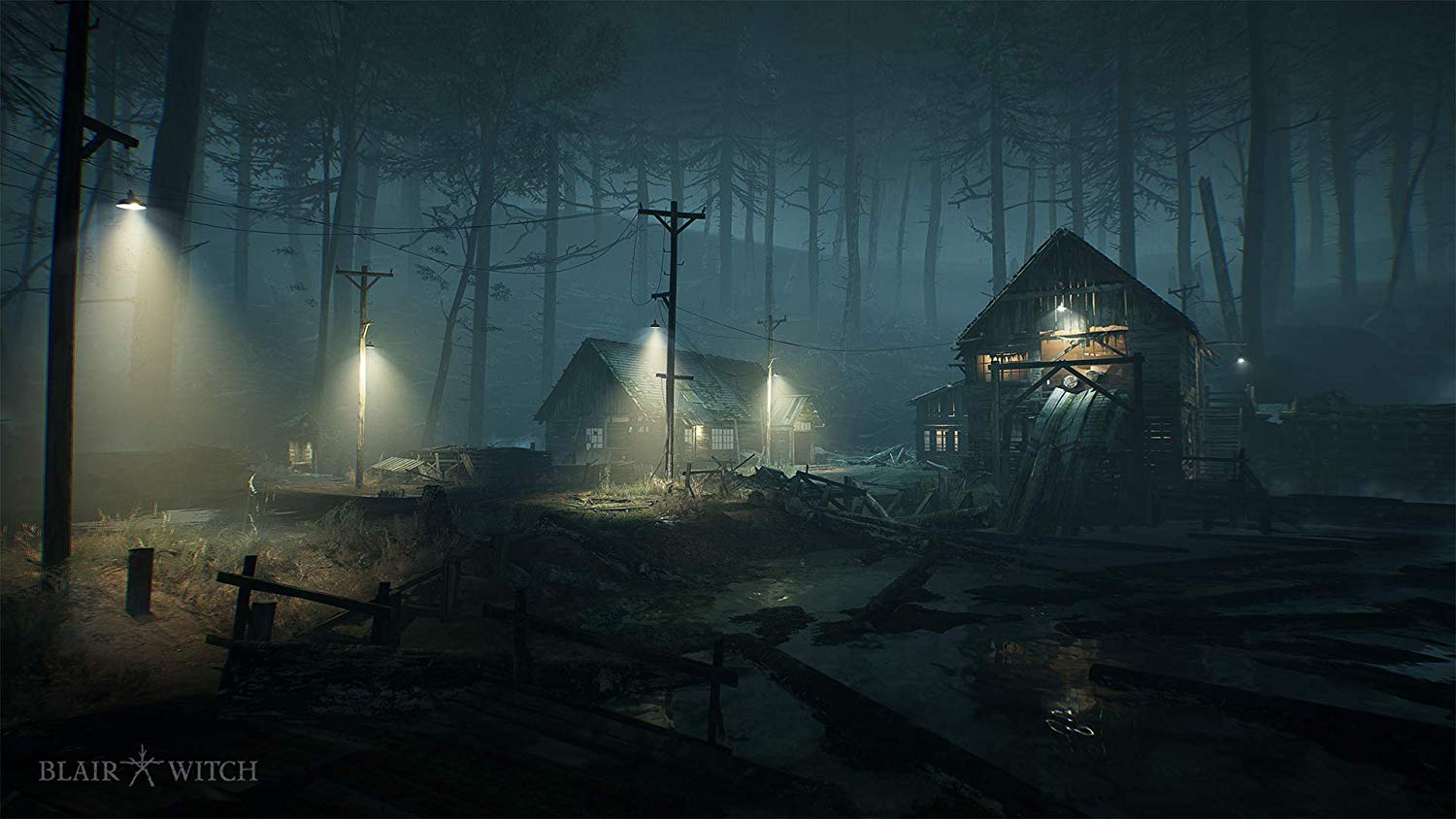 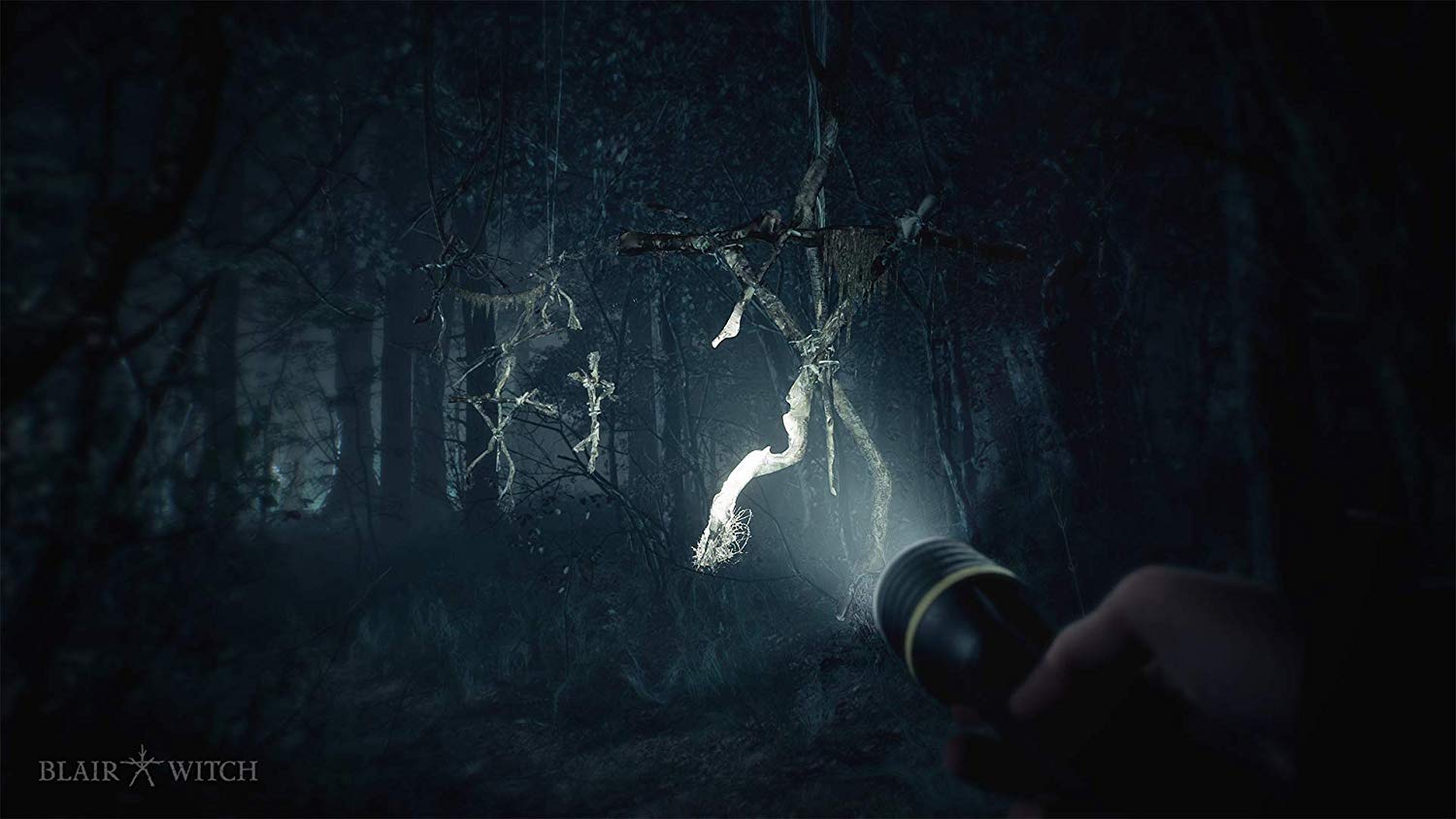 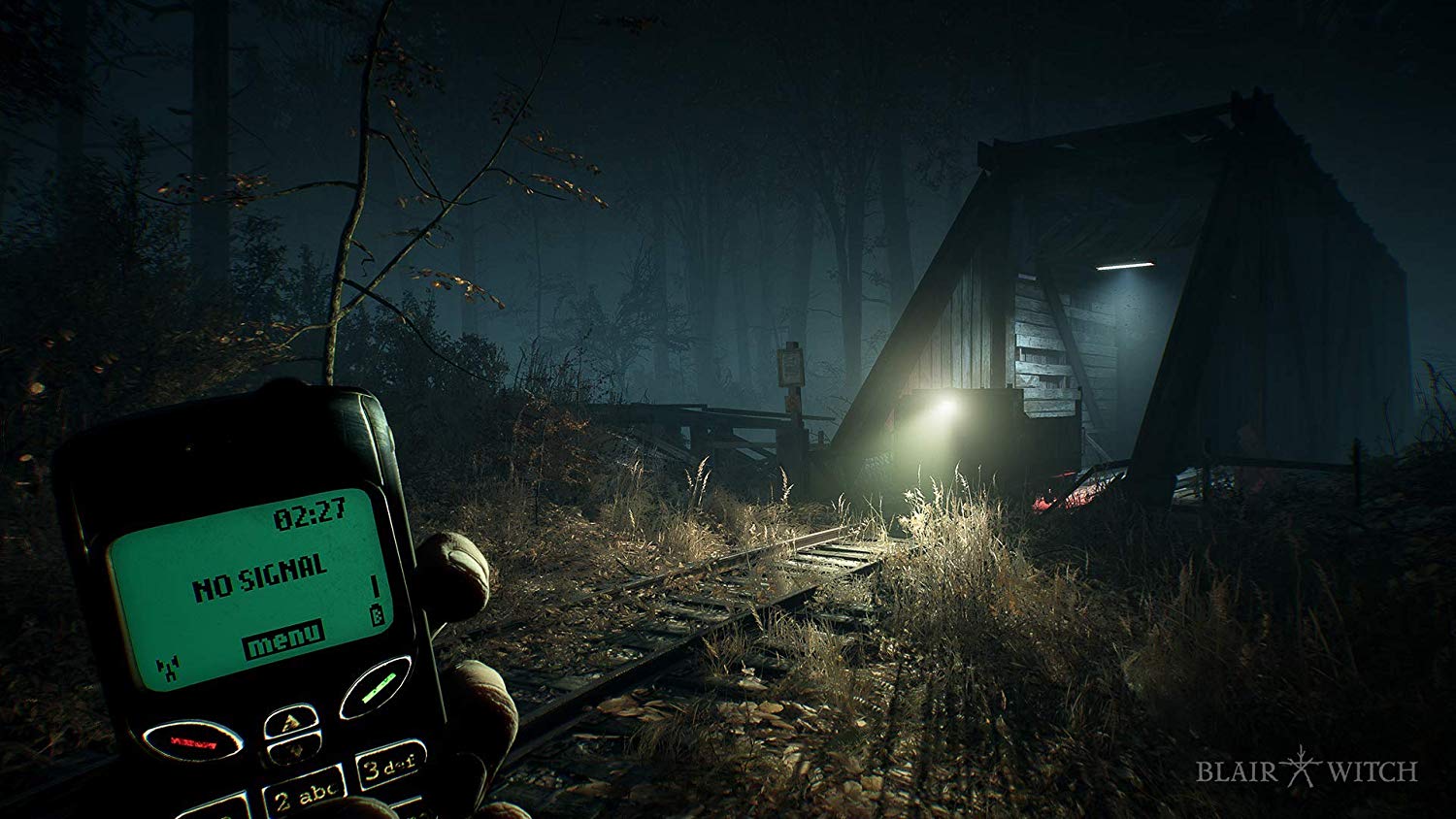 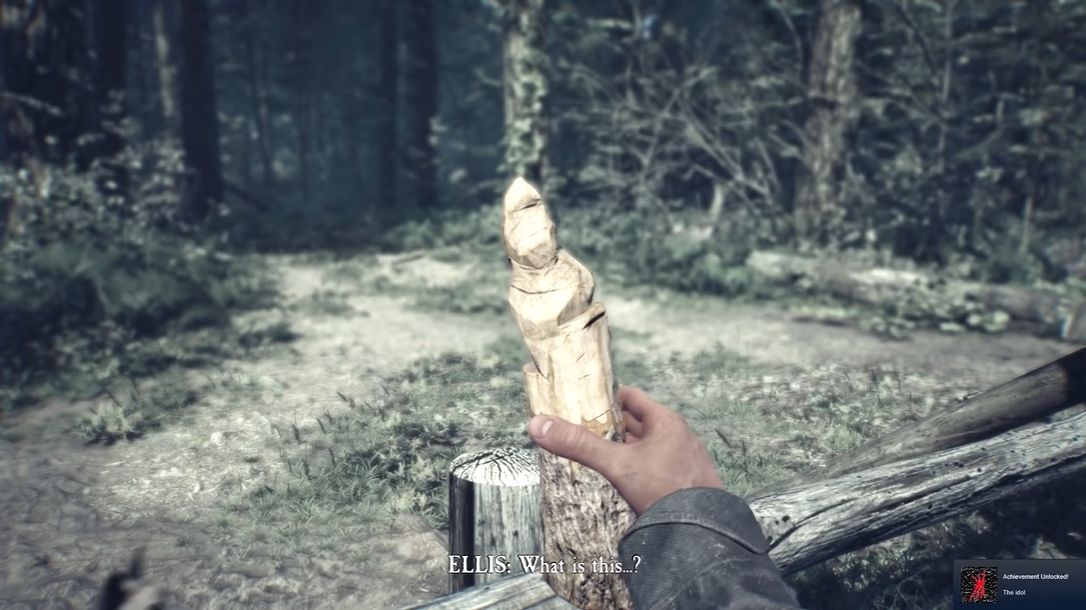 The first Blair Witch movie was awesome. It was a genre-defining "found footage" film with a premise of being lost in the woods. Then there was a hastily-made big budget sequel, which was so terrible I've never re-watched it, and finally another movie in 2016 that was a more modern "found footage" movie. It failed miserably to capture the atmosphere of the first, and it played with time, which always confuses audiences. Blair Witch the game is like a scary, confusing, overlong movie much in the same style as the 2016 film.

In the game you play Ellis, a hardy all-American ex-marine, who has come to Burkitsville (formerly Blair) to aid in the search for a missing nine year old boy. The police are already out scouring the area but have left behind a handy walkie-talkie and a few flyers to acquaint you with your mission. Also along for the ride is your trusty (customisable) dog Bullet, who will respond to commands such as fetch, search, stay, etc. Heading off into the woods is a visceral treat for the senses, particularly with a VR helmet on (It's not a VR game, but much more scary with one on!) and the woods are as frightening as you want them to be. In my case, very frightening at first... but very tedious as the story unwound and I lost a lot of interest in continuing.

Blair Witch has its good points. Graphics are absolutely astounding, with near filmic rendering and ray-tracing throughout. The effects and musical scores are likewise both fitting and eerie. Total silence is also used to good effect occasionally. The dog is an interesting play mechanic. He rarely leaves your side and is often the key to unlocking the game's puzzles. As for the puzzles themselves, well, I liked them because they were not ever so difficult that I had to admit defeat. The game also includes a nice 'guidance' feature; when you get killed (which is actually quite a rare occurrence), there's a quick explanation as to why in the form of a spoken revelation from Ellis. On the one hand, this means you're very unlikely to get permanently stuck. On the other, the fragmented nature of the storyline means that solving these chaining puzzles only propels you into the next section of the game; it doesn't reward you with any plot development.

The more bizarre inclusion of the game is the Video 8 cassettes that you find throughout your hike. You can view these on a camcorder and certain elements of the game will react to what is being shown on its viewfinder. For example, you find a tape with a fire being started in a grate. When you encounter the grate, it is unlit. Watch the tape, pause the video after it is ignited, put the camcorder back in your backpack and the grate will now be burning away. There are quite a number of these cassettes scattered throughout the forest and they present a quite unique aspect to the problem-solving of the puzzles you encounter. And yet, they are peculiar. And if you think Blair Witch is going to explain to you who is leaving you these tapes, why they act as they do and what on earth they have to do with the disappearance of the missing boy then you're sadly mistaken.

Fans of the movies will of course recognise some of the plot devices (wandering in circles, losing track of time, etc) as well as the locations (the log over the river, Rustin Parr's house, etc). Sometimes the game is positively genial in the way these are implemented: trying to reach the sawmill and constantly coming back to the sign that points to it is both eerie, and a sure-fire elbow in the ribs that you need to approach the problem differently, for example. However, on other occasions, failure to spot a single item in the undergrowth leaves you literally wandering in very large circles for hours until you do.

Which brings me to the real problems of Blair Witch; the biggest one being that the plot is practically incomprehensible. Firstly, Ellis seems to have a fractious relationship with his girlfriend. He also has a mobile phone which occasionally pings with text and voice messages from her. Why, and whether you're supposed to care, is not explained. One would have thought that the least a man could expect is a bit of emotional support when he's going out to search a haunted forest for a missing boy... but no. Their relationship seems to be teetering on the brink because of his Post Traumatic Stress Disorder, an element of the game considered so important that there's even a warning before it starts that PTSD sufferers should refrain from playing it in the first place.

Before too long, we're questioning not just a little of what we see but the absolute entirety of it. Ellis suffers flashbacks whenever he is parted from his dog, self-talks about "getting it together", screams "Not now! Please!" while suffering (playable) hallucinations of burning Middle Eastern cities and finds psychiatric reports of a mysterious patient discarded throughout the woods. The Sheriff, who initially instructs him as to where to concentrate his search for the boy, begins to mock him via the walkie-talkie. His girlfriend mocks him via flashbacks in which she is presented without a face. A mysterious voice orders him to complete various tasks "for the sake of the child" via a different channel on the walkie-talkie. The long meandering through the woods is punctuated by longer and longer baffling cut-scenes suggesting Ellis is in the throngs of a full-on mental breakdown. He could well be - perhaps there is no boy? Perhaps there is no sheriff? Perhaps there are no woods? Perhaps all of this is in his head?

Unfortunately, as most people realise, too much contradictory information induces a sensory overload. Whilst you may start the game caring about the missing boy, the lovable dog and the protagonist's resolve to uncover the mystery of the woods, the game asks too much of you: time travel, discordant voices, disconcerting changes of scene, light-to-darkness-to-light, interior house to exterior Baghdad marketplace in the blink of an eye, suggestions that you yourself are the killer... It just goes on and on. Even though you always know what the game expects you to do next, you lose the motivation to do it. Your brain can't compute it all, so it gives up. It has to, because it has no other option. There's no fathoming out what's going on here, and whilst I won't spoil the very ending of the game itself, I will say that the payoff is pathetically unrewarding and, no matter what you do, nothing fits together as an explanation.

Having researched the game after my own playthrough, I understand that the things that you do in Blair Witch are considered "good" and "bad" choices in a ridiculously arbitrary and non-intuitive fashion. That's yet another frustration if you've committed the 10-12 hours an expected playthough might take. And I certainly won't be playing it all again to make the "good" choices.

And, whilst I'm on the subject, the game is meant to be set in 1997 and yet, at one point in my own playthrough, I uncovered a missing child poster from many years later, to which Ellis murmured something like "Another missing child? What's going on here?" Quite.

Blair Witch is a big game, and it has a lot of genuinely creepy moments, as well as a lot of love for the movies that inspired it. Sadly, its programmers have failed to tie its different elements together into a coherent whole. Verdict: I've played it through, and it was creepy and it was entertaining, but it was also far too messy to really be a classic.