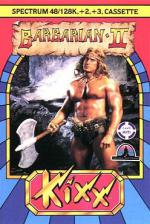 Perhaps if I'm quick this month I'll be able to stick in the odd slash/chopper joke before anyone notices, eh? [I'm waiting. - Ed] Oh, er, yes - let's talk about the game instead, shall we. readers?

The orig Barby was a (one- or two-player) straight hand-to-hand hunky-bloke beat-'em-up - which worked quite well and hung around the top of the all-important game charts for absolutely ages.

Then came the follow-up. In other words, this. What they decided to do was take the best fighting moves from the first game, stick you in a maze of around 100 flip-screens (split into four levels), and bung in loads of different baddies to dispose of, objects to help and things to find. And now it's out on budget (which is what it's doing in Barg Basement)!

Hmm. The graphics are really good and well animated (all big and chunky) - you should see this whopping great dinosaur dragon thingy for a start (well, perhaps you shouldn't 'cos he comes along and bites yer head off). But after a bit of playing you soon discover that beating baddies is merely a case of doing the same move over and over (and over) again. And as a walk-around-and-collect- things type game it doesn't quite make it because everywhere looks the same and the whole thing becomes rather annoying and not particularly fun to play at all. But still worth the light of day for a couple of quid (perhaps).

As a walk-around-and-collect- things type game it doesn't quite make it because everywhere looks the same and the whole thing becomes rather annoying and not particularly fun to play at all.