Published in Your Sinclair #52 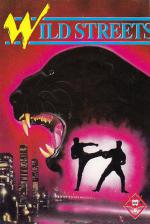 Ready for the plot? Okay, here we go. You're a cop. Your job is to rescue the head of the CIA, who's been kidnapped by the Mafia (because he'd been trying to organise a major drugs clean-up or something). And, um, that's it, more or less. Hardly original, eh? Oh well, never mind- it sort of suits the game.

Basically, this is about as bog-standard a beat-;em-up as you can get. You've to fight your way through 'five action-packed levels', each divided into lots of sub-levels (ie different screens, because it doesn't scroll), and featuring various sections of New York. Not easy, you might say. but luckily the NYPD have provide you with some help to prepare you for the forthcoming onslaught of violence. No, not a whopping two-ton bazooka and a bloomin' huge tank (which I'd have chosen) but a rather large pussycat and tiddly little pistol. Titus seems to think they'd be more help. Oh well.

As with most games of this type, everything is viewed from a cross-sectional perspective, which means you see everything from the side as you walk from left to right, killing everybody/thing in your path. The best way (as you might expect) is to deliver a quick parp from the old gun, knocking 'em dead in a flash, but oh no! As luck would have it, in your eager rush to single-handedly take on the entire cigar-chewing Mafiosi, you've forgotten to pack more than six bullets! A bit of an oversight, I'd have said, because once you've dispensed with all your ammo (round-about the third screen) you have to resort to the usual kick-and-punch method, which is not only slower, it's been done much better before. Take Renegade for example (which'll only cost you three quid these days).

Ho hum. Anyway, how does it work? Well, various waggles on the joystick will enable you to punch and kick your enemies in various parts of the body, which is all well and good as far as it goes, but unfortunately it doesn't go very far. For example, no throws or leg sweeps or any other vaguely interesting moves are up for grabs - I'll admit it is possible to head-butt but the pathetic beeps that the Speccy gives off and the lack of pain on your enemy's face when you sock it to him above the eyebrows hardly make it worthwhile. The end-of-level baddies only take a few punches here and there to them off too. I don't know, baddies these days - they've just not got the staying power.

Yes, yes, yes! But what about the pussycat, I'm sure you're shouting! What does he do? Surely he spices things up a bit with a spot criminal dismemberment or something? Well, no, actually. I mean he should - he's a blimmin' panther! But with a name like Black Virgin all he does is wander around looking bored (intelligent animals, panthers) then jump up and knock one or two of the baddies over when you're in a bit of a tight fix. No blood or anything. Personally I think he'd be more help as a rather silky fur coat to keep you warm through the cold streets of New York!

So what's the plus side? Well, the characters are large and quite well drawn, and the flip-screen backgrounds are well detailed, adding more variety and realism to the game than in many others. Unfortunately though, a few minor things seem to have been ignored - playability, smooth animation and sound. The movement of the characters is both jerky and unrealistic (check out that jumping movement!), and what is that large banana-shaped thing doing each time you throw a punch? Growing out of your head or what?

Um, so where does that leave us? Well, I can't help thinking it's with a well-known four letter word beginning with 'c' I'm afraid. Well, perhaps that's a bit harsh, but it's just soooo boooring. I mean, I'd happily let the CIA bloke die rather than go through the hassle of trying to save him in the first place. (Sorry, any CIA types out there - I don't mean it personally.)

Yet another beat 'em up with absolutely nothing new or interesting to offer. Sorry, I just didn't like it.

Ho hum. Yet another beat-'em-up with absolutely nothing new or interesting to offer. Sorry, I just didn't like it.