Published in Your Sinclair #83 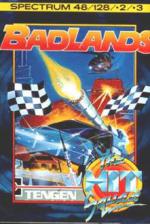 Ivan 'Iron Man' Stewart's Super Off Road Racer? Professional Grand Prix Simulator? Supersprint? Ring any bells? *Badlands*?? All (but the Codies' effort) coin-op conversions, all basically the same game, and now all available for less than the cost of a very small, decent(ish) meal at your nearest Little Chef.

And as ever, these overhead racing things always tend to be fun, and especially with a friend. Fun, in fact, in this order.

Supersprint and Grand Prix sim were pretty crap anyway, so let's not bother scrutinising them any more. Then came Off Road Racer - a game that simply oozed quality (as opposed to bad programming). Here you didn't race around on a black void - you raced over bumps and jumps. So the handling of the car and the graphics had to compensate - there are 112 different truck sprites the game can choose from. And believe me, it's effective - give or take quite a lot of colour, you could probably almost mistake this for the arcade original. (Well, after a few jelly babies, anyway). The satisfaction of successfully pulling off a jump, deliberately ramming an opponent from the track or skidding around a corner to the relatively boring accelerating and braking necessity of Badlands is like riding a BMX pulling wheelies, jumping from kerbs and skidding over grass as opposed to riding it sensibly along the road.

Of course, both games involve the usual expedient of collectables-as-you-drive in order to soup up your vehicle, Badlands perhaps winning here with a case of 'if at first you don't succeed, buy some missiles, blow up your opponents or even annihilate some of the scenery instead'. Both also feature eight tracks (Badlands' are again more varied) but at the end of the day, Road Racer is more fun, and that's (let's face it) what counts. Wibble.

The relatively boring accelerating and braking necessity of Badlands is almost like buying a BMX in order to ride it sensibly along the road.