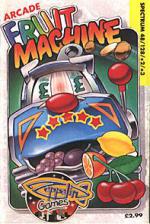 Just what the world needs. Another fruit machine simulator. Whilst there's already a glut of turgid simulations filling the toilet of the budget's it's amazing that yet another chocolate log can be produced.

I suppose the production meeting went like this; "OK lads, we need a really big budget success. What's been at the top of the budget charts for the last eleven decades? Oh, Codemasters' One-Armed Bandit simulator. They're easy to write, aren't they? Three rolling graphics, a couple of flashy lights, a few bloopy noises and you're there. Get Daz, Gaz and Waz onto it, and we'll have it in the shops the day after tomorrow."

Well, they got it in the shops alright, and it's a perfectly good fruit machine simulator: you can give yourself up to 99 credits to start with, hold the reels, roll them forwards or backwards, (so long as you ignore the wrong control key given in the instructions), go for the Cash 'n' Grab bonus by lighting up the letters along the top of the reels, nudge, win spins, use the Feature control to stop the reels at a particular point, and all that stuff, but what is the ruddy point? Surely the idea of a fruit machine is to lose all your money, and since you don't have that excitement on the micro version, it all seems rather silly. In any case, anyone mad enough to want to play fruit machines on a computer will already have the Codemasters game, and Zeppelin's isn't sufficiently better to make it worth the effort.

Admittedly, if you're so addicted to one-armed bandits that you pour all your money into them, this might be a cheap way to break the habit. Unless you're a Fun City psycho I really can't see any point in bothering with this one.

Roll them reels! Punch them buttons! Yawn yawn! Unless you're a Fun City psycho I really can't see any point in bothering with this one.