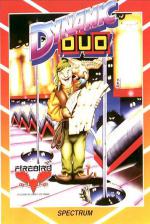 I treasure the memory of one episode of New Faces when Tony Hatch wanted to give some poor clod nought out of ten for star quality. Come on, said the compere, everyone's got to have some star quality, you can't give him nought. You're wrong, said Scarface Hatch; this man (an inept Tommy Cooper-style comedy magician) will never, ever make it in a million years. And he was right.

I feel the same way about Dynamic Duo. While it's got a couple of good ideas, the whole affair has been so shabbily cobbled together all you're left with is an incomprehensible frenzy of moving things and split screens.

Cutesy animal games have always made me faint with indifference; the only exception was Head Over Heels, which was very clever and nicely programmed. Dynamic Duo pinches the same idea, but isn't.

You control two supposedly lovely-wovely creatures, a dwarf and a duck, described in the instructions as a "winged bird", presumably as opposed to a finned bird. Your aim is to explore the Night House, a scary castle, searching for the ten keys hidden in treasure chests. When combined, the ten keys admit you to the Calculation Room, which hides the secret of the destruction of the Dark Powers.

The design and animation of the main characters is dire, and to make matters worse, the action takes place in a thin strip in the top third of the screen. This doesn't allow much space for exciting background designs or interesting baddies.

Just to double the dullness, the two characters can split up and explore separate areas of the map. The duck can fly faster, but only the dwarf can open the chests, so you have to divide your forces and toggle between controlling one and the other to complete the game. When the two are together, they can drop through trapdoors onto lower levels by using the Down control. They can also move upwards through doors by using - yes, you guessed it - the Down control again. Mental. The trouble is that once you've separated, it's almost impossible to get the two to combine again so that you can pass through the trapdoors. Mental again.

At the end of each level is a barrier which can be destroyed by pushing a boulder into it, and zapping it until it explodes. Each creature has a limited number of zaps, shown in the score panel in the bottom third of the screen. What two lovely-wovely fluffy animals are doing with high-energy weapons is not adequately explained.

Sound effects are minimal, and control awful. It's very difficult to regulate speed and direction with a joystick, and you can't redefine and control keys, which are ridiculous; 1, Q, CAPS SHIFT and Z for player 1, and Y, L, ENTER, P for player two. Again - a thoughtless mistake.