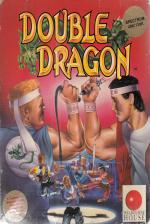 I hope you haven't been holding your breath waiting for this one, because 1) you'll probably have gone blue and died by now, and 2) it wasn't worth the wait. Double Dragon is NOT going to go down in the record books as one of the best-ever coin-op conversions. Far from it.

You probably know the plot; it's a martial arts romp in which one or two players can fight to overcome the vicious street gang of the Shadow Boss. As you move through the horizontally-scrolling streets from one section to another, you'll have to overcome a variety of enemies fighting in different styles and with different weapons. If you hope to overcome the baddies, you'll need to take some weapons off them to aid you in your fight.

If you've seen Renegade and Target Renegade, you'll get the idea immediately; Target Renegade, especially, is very much like Double Dragon, but the Spectrum conversion was so much better that there's no real comparison.

So what's wrong with DD? For a start, the colour scheme is pretty badly worked out. Because you can move "in" and "out" of the screen, as well as left and right, the characters clash with the backgrounds to such an extent that half the time you're fighting people with green heads and yellow trousers. This is off putting enough, but the backgrounds are poorly designed too, and the perspective is off in several places. What's more, the sprites are rotten; everyone's got a head like a squashed potato, and they all look more like Mormons than street thugs, the whip-wielding bimbos included. The throwing knives look more like sausages, and the clubs like carrots.

What's worse, though, is that control of the characters is so poor. You have a wide variety of fighting moves, including head butt, jump kick, punch, mid-kick and so on. The trouble is that your character responds so sluggishly that your enemies can quite easily trap you between them and just keep knocking you down every time you stand up. It's not much consolation that you can often do the same to them once you've managed to shake them off, turn around and get into position for a good punch or whack with a club.

It takes two or three hits to make a character fall, depending on what weapon you're using. You have five falls in each life, but because you start with five lives, it's pretty easy to plug away and get as far as, say, level 3B, the Forest, without exerting much effort. There are five levels in all; City, Factory, Forest, Hideout Exterior and Hideout Interior. In the last level you'll meet the Big Boss, armed with a machine gun.

So, what a pity. This could have been a great game - it's certainly great fun in the arcades. This conversion though captures little of the excitement of the original. Poor show.

This could have been a great game - it's certainly great fun in the arcades. This conversion though captures little of the excitement of the original. Poor show.