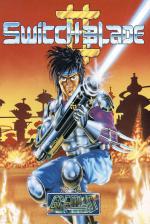 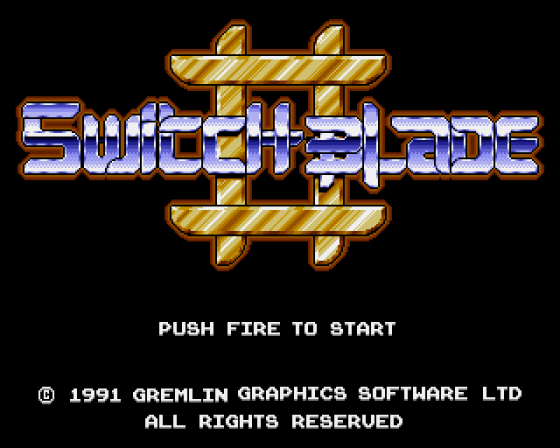 The last word in Japanese arcade adventures arrives in the form of Switchblade II but (and this is the really weird bit!) it isn't even Japanese!

Now here's a funny thing. Switchblade II reviewed in the very same issue as the original Switchblade (check out the budget section to find out what we thought of the first game). This follow-up is a bigger proposition altogether, and sets out to silence one of the major criticisms of Switchblade - the one that all the screens looked the same. There's loads of graphic variation in this sequel, with forest scenes, underground scenes, scenes in the same tunnel-and-cavern network as the original, industrial dockland scenes, and lots more besides. So, er, that'll be that criticism silenced, then. In many ways, Switchblade II visually resembles Midnight Resistance, but the gameplay actually contains several elements of both Rainbow Arts' Turrican and the more recent Gods from Renegade.

Um, well, that's a tricky question. There isnt't much in Switchblade II that hasn't been seen before (and seen several times for that matter), but I don't think I've seen a game that did all of it quite so well until now. There aren't any weak elements in here at all. The game is instantly playable, the graphics are uniformly beautiful, the sound is atmospheric and solid (although to be scrupulously honest, it's more 'good enough' than 'absolutely stunning'), the difficulty is very well-judged, there's no reliance on the infuriating 'learning from experience' (i.e. killing you without any warning and then relying on you to remember exactly where it happened) cop-out that completely ruined Rick Dangerous 2 for me, and there's always plenty going on to keep you occupied. 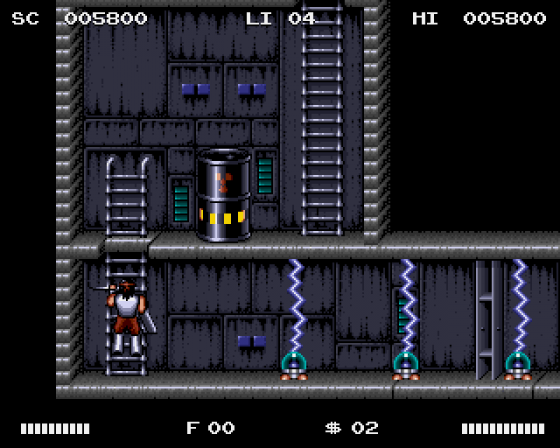 Even when you've gone right through a level, there's likely to be at least one secret room you haven't found yet, or one secret entrance to another huge section of play area to stumble across. (I'm still finding new bits just on the first level.) And 'huge' is a word that keeps coming back to me when I think about this game. Each level is massive, and with six of them to hack through, separated by some pretty mean end-of-level guardians - you'll be plugging away at this game for absolutely ages before you get anywhere near completing it, especially as the difficulty rises perfectly throughout, letting you progress further each time you play but getting phenomenally hard nearer the end.

This is a feature it shares with its predecessor, but the difference with Switchblade II is that the completely new graphic style of each level gives you a real incentive to keep at it.

Even though most of the elements of Switchblade II aren't new, some of them are still executed in an innovative style. The idea of collecting money and buying power-ups, for example, is as old as the hills, but here at least some of the power-ups are a little more imaginative than the usual three-way-fire-and-smart-bombs type of bog-standard weaponry. I'm thinking particularly of the 'dragon', a bizarre and elegant weapon which consists of a small, well, dragon (you won't be surprised to hear) which flies around you in what seems to be a fairly random manner, killing any baddies it happens to bump in to. 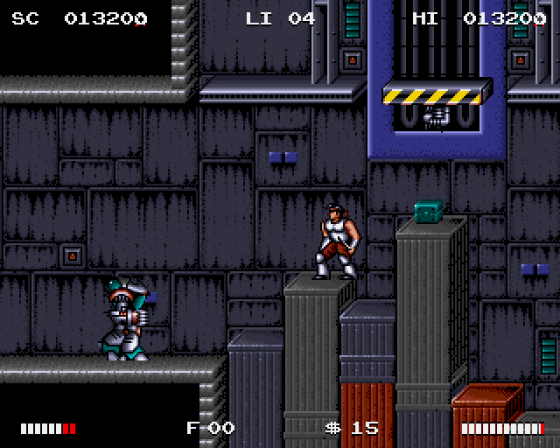 Quickly though, you realise that it never flies far away from you before homing back in on your position, so you can use it to carefully eliminate enemies that would otherwise have caused you serious problems - those lurking at the tops of ladders, for example. For some reason, this is such an incredibly satisfying thing to do that it gives the game a whole new lease of life, as well as giving you a really clever and smug feeling. (Until you lose concentration, and get knocked off a platform by one of the bad guys and plunge to your death at the bottom of an incredibly deep lift shart, that is).

I'm also a dead sucket for rain effects in games (which this has got) and having the first level in a similar style to the original game to create a feeling of continuity is a great idea. My favourite little touch, though, has to be the way that extra lives appear in the form of the character sprite from Switchblade. It's only a tiny touch, but it's typical of the amount of trouble that's been taken on this game to make everything feel just right.

Well, not much really. The only niggles are tiny, tiny things, like not being able to jump on to or off ladders, or the baddies being a little bit characterless and not changing much from level to level. Then again, there are compensations - like being able to shoot things that are slightly off-screen, the natural and flexible jumping system, and the way you stop momentarily when you're going down a ladder and reach a floor level, which can be invaluable when you need to tackle a baddie with split-second timing. 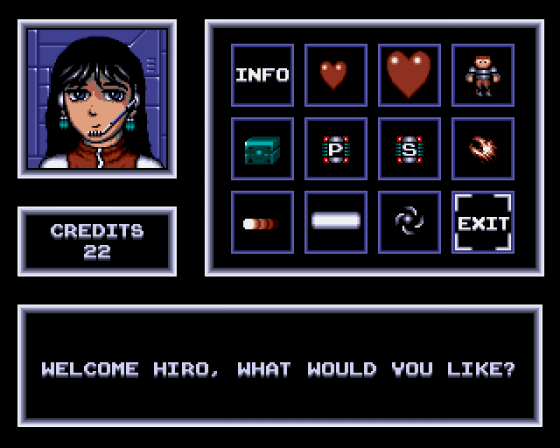 Generally the feel is of a very well put-together game indeed - it's very rare that you get annoyed by something that isn't intended to annoy you. There's enough frustration to make it addictive, but never enough that you become disheartened, and if Switchblade II was a coin-op, I can quite confidently say that I'd be chucking money down it for quite some time. It's an arcade game in the purest sense - there's little thinking involved, but it's so nice to play you won't even notice that your brain has atrophied. And what's more, it won't matter. Superb.

This is more of a 'slight correction' than an 'I don't agree with you at all' type of an "On The Other Hand..." box, I'm afraid. Yes, I agree with Stuart - this is a jolly good game. It's pretty. It plays very fast and it feels very much more like a 16-bit console or an arcade game than something you'd expect to find on an Amiga. In fact, I'd even go so far as to say it looks a lot more like an arcade game than anything I've ever seen on the Amiga.

However, I don't think it's particularly new or original or different, and this would knock the mark down quite a bit for me. It's certainly not as clever, as interesting or as absorbing as Gods is, for instance - a game that's really grown on me since last issue, it has to be said. No, I'd call it a low 80s rather than a high 80s, and leave it at that. - Matt Bielby

Uppers: Playability reigns supreme, but not at the expense of anything else. Sure to last a very long time indeed.

Downers: The end-of-level baddies are a bit of a pain, in an unimaginative kind of a way, and some in-game music to go with the sound would have been nice.

A completely excellent platform game that wouldn't shame an arcade. Easily the best example of its genre so far, and one of the Amiga's most impressive all-round games of any kind.

A completely excellent platform game that wouldn't shame an arcade. Easily the best example of its genre so far, and one of the Amiga's most impressive all-round games of any kind. 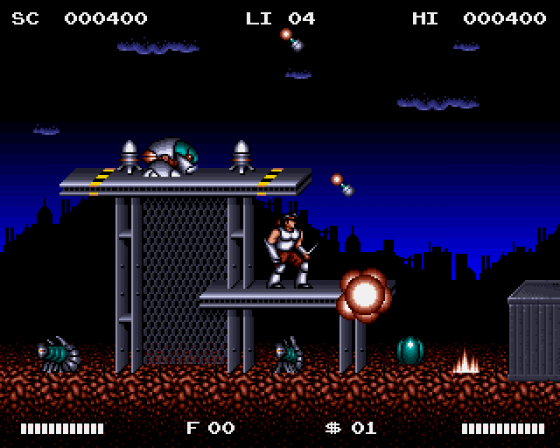 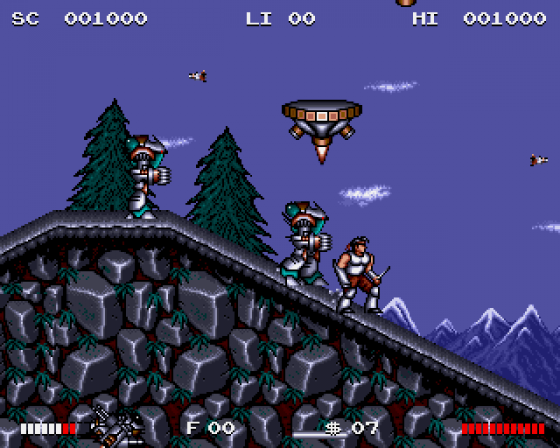 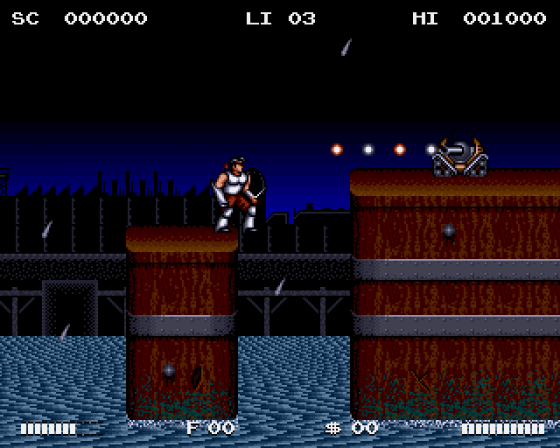 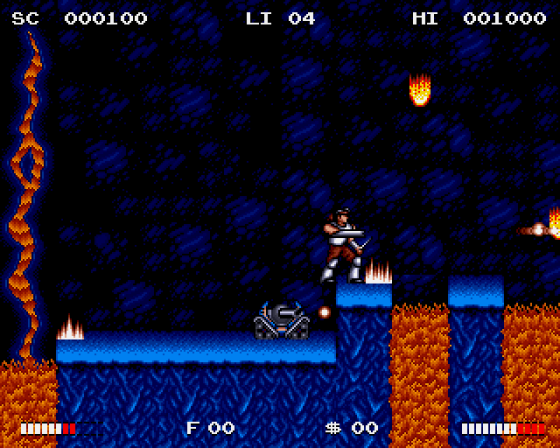