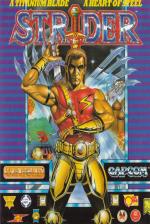 A super-agile CIA agent storms Russia in search of secrets.

Step boldly into the world of espionage (no apologies for the pun), where a lone, highly talented hero storms the snowcapped peaks of Siberia in a quest for secrets to take home to the CIA.

Strider is an unusual fellow. He uses no projectile weaponry, just a sword which he wields with lightning fast reflexes and an acrobatic ability second to one. In fact Strider is the perfect ninja, using basic weaponry against the genetic engineering and hi-tech of the Russian army.

Strider departs from the usual form of platform game, the platforms quite often becoming walls, ceilings and so on. To a normal character, these sheer surfaces would be an unsurmountable barrier but, with his unique talents, Strider can climb vertical walls, hang on the underside of platforms and negotiate the steepest slope with ease. When Strider encounters a villain (although technically speaking Strider is the villain of the piece), a quick swipe of the sword makes all well in the world once more. When Strider attacks with his sword you see a blur of movement, as if someone had swirled a cloak, and all within the swirl feel the deadly blow.

Occasionally he will encounter canisters which contain bonuses; apart from standard options like more life energy and temporary invulnerability, he can pick up a droid consort, which orbits his person forming a limited shield.

The first level starts with a low aircraft pass which drops Strider into the heart of Red Square. From here Strider must battle his way past many heavily armed troopers and some rather weird organic monsters, the first of which are the pygmy elephants. These creatures lurk near slopes and take pot shots at our hero as he climbs. The second organic monstrosity encountered on the first level is the end-level monster and what a monster it is. A giant caterpillar dwells in the U-shaped council chamber. On its own it would be quite harmless but it has picked up the nasty habit of charging around the room waving a sickle.

Strider's acrobatic abilities come into play at this point in the game because he can bounce around the U-shaped chamber and still pause occasionally to take a swipe at the caterpillar guardian.

As you progress through the game, you see some sights that most assuredly do not belong in present-day Russia. The wasteland with its dogs and parachuting bombs I can tit into my reality map but the ninja ballerinas and the boomerang-throwing Amazons take more than a little believing.

It takes a certain amount of faith to play this game, as more often than not you are faced with the choice of whether to jump into the void hoping that there will be a platform on which to land or whether just to drop off the edge.

With a little experimentation - and a few lost lives - you soon work out when to jump and when to drop.

Never in my gaming experience have I ever come across a character so agile, and controlling him is a delight. The foes vary enormously and a surprise awaits you on every platform. This is one game that I can wholeheartedly recommend to the discerning player.

Never in my gaming experience have I ever come across a character so agile, and controlling him is a delight.