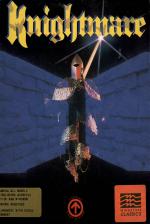 If you're looking for a new, more magical Captive, you're in the right place. If, however, you are a fan of the TV show, don't do it! 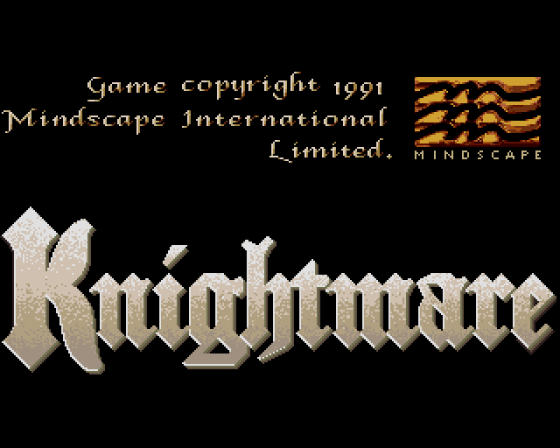 Mmmm. Being the resident 'weirdo who likes this sort of thing', it's no surprise to find myself reviewing this sort of thing. Maybe the FRP revolution hasn't quite reached the other members of Amiga Power just yet...

And so we come to the Captive game that isn't. Written by Tony Crowther (Mr. Captive himself) and, indeed, using the very same player interface and game structure, the big difference here is with the scenario. Whereas Captive was very obviously a cross between Dungeon Master and the film Aliens, Knightmare purports to be a game based directly on the cult(ish) kids' TV series - I say purports because I've got a couple of very real problems with the way it's been done which I'll get to in a minute. What it actually comes across as is Dungeon Master without the Aliens aspect - just straight Dungeon Master, in fact - the elements of the TV show we can find (Treguard and that weird elf kid, two TV characters who make quite a few appearances) tacked on afterwards. Even Mr. Crowther admits that he was much more interested in writing a DM-style game than trying to stick rigidly to the format of the programme, which makes you wonder why anyone bothered getting the licence in the first place.

So what of the game itself? Well, fans of Dungeon Master, Captive, Eye Of The Beholder et al will have no trouble getting straight into it - the player interface is remarkably similar. Those drawn in by the 'Knightmare' tag (particularly the younger viewers who actually watch the show) might experience one or two problems, however - it'll prove far too complicated for them. Again, I'll get to that a bit later. 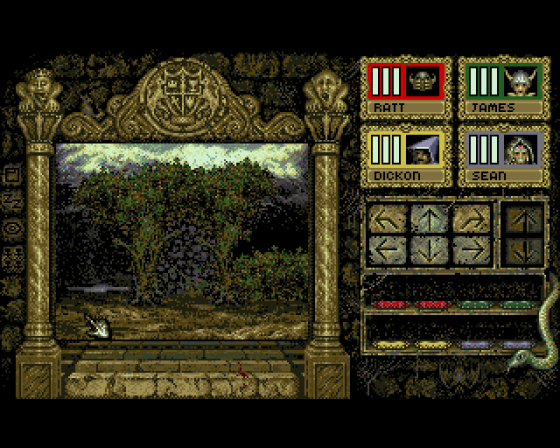 What the game basically offers is a first-person (as if viewed through the characters' eyes) view of the game world, which is quite simply a bunch of inter-connected squares. Various features (shrubs, walls, rail lines) are placed in each location, and viewed together as a whole, the result is akin to a 3D world.

This is pretty neat - monsters can be seen lurking behind trees far off, only to wander around, eventually encountering the player's character(s) and getting into a scrap. The bad thing about this cellular mapping system is that things occasionally come across as a little contrived and blocky. Knightmare's level and quality of graphic detail copes quite well by current standards, though from what I've seen of Eye Of The Beholder 2 it's soon going to be shown up quite badly.

The Captive game system doesn't really match up to SSI's Beholder system either. Mucking around with objects and combat just feels too clumsy - I'm sure something a little more intuitive could have been sorted out. After all, re-using the Captive system was an ideal opportunity to refine it and iron out the problems, and while much has apparently been done, in practice it makes little difference. 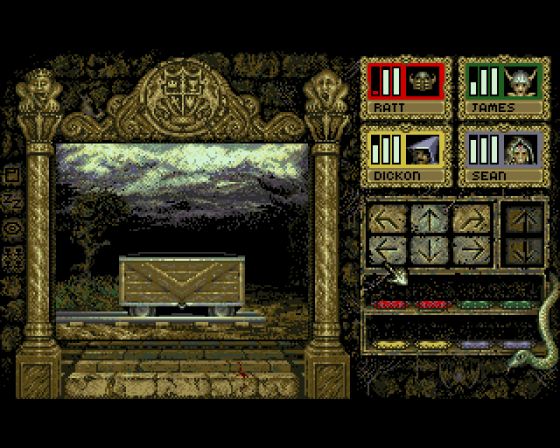 Indeed, in many other ways - graphics aside - this seems rather over-reminiscent of Captive. Even the map layout of Knightmare is similar - the adventure begins outside in the wide open spaces, then (after solving one or two elementary problems) leads into the Dunshelm castle itself. From here on it's off into a land of maze mapping, puzzle solving and combat with hobgoblins and their ilk - who said originality was dead?

If I sound just a little down about the whole thing, then it's probably because of one or two complaints.

One - I've seen all of it (or something remarkably similar) before. Everybody is jumping on the fantasy role playing bandwagon right now, and while this is perfectly healthy providing each release manages to inject new elements into the genre, there's also that cloning danger which has already all but killed the shoot-'em-up (if I see another sideways scrolling one, I think I'll scream). Knightmare doesn't really make any significant changes or improvements - just presents it all in a slightly different way - and that's a crime as far as I'm concerned.

Problem number two - the graphics are just too bitty and indistinct. Everything has been given a text look. All well and good, but when there are tiny objects littered around the place, and when everything is painted in the same colour tones, objects just blend into the background. I'd rather have slightly less 'realistic' graphics, and be able to clearly see things. Not a major complaint, but it's a complaint all the same.

Problem number three - it's got almost nothing whatsoever to do with the TV show! What is the point of getting a licence for something when the only connection you're intending to make with the game is a shared fantasy setting? Worse, you're in danger of pitching what turns out to be a fairly hard and involved example of an already fairly hard and involve genre at *completely the wrong audience*. It scares me to think that an eight-year old fan of the show might fork out £30 on this game - or have £30 forked out for him - when he's not even going to be able to solve the first puzzle!

It's quite clear what a Knightmare game should be like - a fun and easy fantasy role-playing game to introduce new and younger players to the genre, perhaps not unlike Gremlin's Hero Quest - but this is a model they seem almost perversely determined to avoid here. Such foolishness!

But okay, okay, you guys have read this far, so you're in little danger of buying the game because you don't realise what it is you're getting. Let's judge it on its own merits, as if it were simply a Captive sequel, say, and nothing to do with a telly programme at all. Taken in isolation, then, Knightmare doesn't fare too badly (if you like that sort of thing, but I do so that's alright). It's pretty damn huge, and the puzzles are paced at just about the right difficulty, and the right intervals - Tony Crowther has said he found Eye Of The Beholder too easy, and has made this game a lot trickier to complete.

That said though, there's still a slightly fussy control system to contend with, and I've got problems with the characters. Fantasy role-playing games rely on the player identifying with his characters, or at least getting remotely emotionally attached to them. Knightmare's characters seem to be composed of a few dull statistics and very scrappy (and inexplicably tiny) cameos. Here, watching a party of four characters die is a very cold, detached experience (kind of like watching all the Friday the 13th flicks in one go) and generally they do little to promote a sense of atmosphere, so important in a game like this.

Which (and why not?) brings me onto the final bee in my bonnet. I resent having characters take damage by walking into walls (acceptable just about, but surely they'd have the sense not to bash their heads against it?) and bushes (mutant man-eating bushes perhaps?). Walk into a bush enough times and you die - what a ridiculous state of affairs. Even throwing a ball against a wall, then catching it, causes damage! If I'm supposed to believe that this hardy band of adventurers can't even catch a ball without getting beaten up by it, what hope of completing the quest, eh? I'm sorry, I know these games are all about the suspension of disbelief, but when a game is as unfriendly as this, I find it a little hard to bear.

This is actually quite a good product (despite my torrent of whinges), and anyone with an insatiable appetite for this sort of role-playing is unlikely to be disappointed - I know some people who are very excited about the game. The fact remains, however, that it's simply not good enough in a market where SSI and Co. have already set the standards incredibly high. As Stuart says, "Knightmare is Treasure Island Dizzy, but without the cute graphics" - make of that sentence (or indeed Stuart) what you will, but at least he's saved me the effort of thinking up a last line for the review...

Uppers: The Captive system given a more appropriate fantasy setting. The game is also more compact that Captive, albeit with a higher concentration of puzzles. Game-starved, hardcore RPG-ers and the like will be in their element.

Downers: Not enough thought put into the general concept, rather than the details, basically. It could have looked better, had more atmosphere, had more to do with the TV show, and blown away all the other fantasy games out there, but it hasn't. The idea that sub-twelve year olds might buy it for the TV connection is frightening, too. Don't do it, kids!

It feels like role-playing by numbers. Complacency is not a pretty thing, and this game doesn't take a single risk or make any strides forward. The role-playing world just doesn't need a game like this, and the Knightmare TV show certainly doesn't.

This is a hard RPG game... The idea that sub-twelve year olds might buy it for the TV connection is frightening, too. Don't do it, kids! 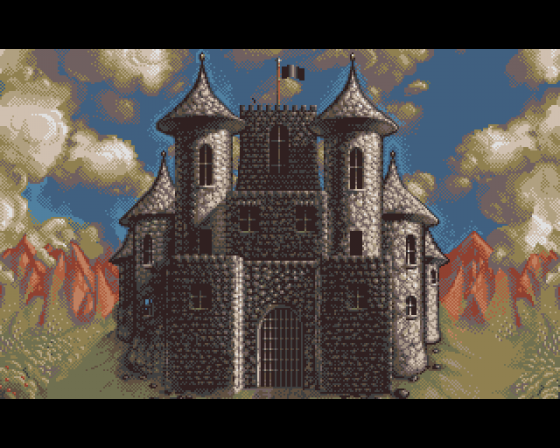