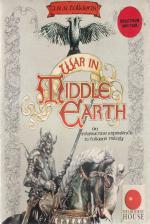 Holding the rights to games from the wacky world of the famous John Ronald Reuel Tolkein has its benefits, dunnit? Like being able to whip off a new game every now and then when the mood takes you, based loosely on the magnificent fantasy 'tour de France', Lord Of The Rings trilogy. But War In Middle Earth? Where does that fall?

I admit that I booted this game with a steely glint of suspicion in my eye, looking every which way for a reason to slag it off as forcefully as I could. But after about fourteen hours play on the trot I had to collapse with defeat. Try as I might, I couldn't find extreme anything to poke fun at, not even the graphics.

The scope of the game is broad indeed, like the unsettling boast on the packaging. "Multiple playing levels let you control all the characters and armies that appear in Lord Of The Rings, from the broad sweep of strategy, right down to individual characters actions on the battlefield"(!). Coo, is that a fact?

WIME is, in fact, a new game from Mike "eight billion locations and a cast bigger than Ben Hur" Singleton, the writer of the Lords Of Darkness games. He specialises in that sort of thing, of course, but this is more of a strategy game than his usual graphic strategy adventures. I'm reminded of some of those wargames, the like of which Owen and Audrey Bishop used to review; you know, PSS and CCS make them? You have a map on your screen, and you move a cursor around the screen with keys or various flavours of joystick. WIME has the Mike Singleton touch, though, in that you can not only deploy whole regiments of humans, orcs, dwarves and elves, but also zoom in closer to control your own characters, like Frodo who carries The Ring.

You can wear The Ring, or just carry it. Wearing The Ring makes you invisible, but as you will know if you've read the books, this starts to alter your characteristics. For the worse. You can give The Ring away, but be sure you know who's got it, because you must take it to Mount Doom and destroy it by chucking it into the Crack Of Doom. Once the Ring is destroyed, that's the end of Sauron's power, and the game too.

The look of the game is fairly unexciting, on the face of it, and is not the sort of thing that'll appeal to your average action-packed laser spitting arcade junkie, for sure. But it is a gigantic strategy game, and for those of you who need something a little more meaty to get your teeth into (and there isn't a Pepperami handy) then this could be just the thing. Some folks prefer this kind of adventure to a pure text affair, and why not? I look at pages of text on screen all day and it drives me mental. This is a big game, for big heads.

Fabby strategy game, based on a great story. Buy it.

This is a big game, for big heads. It's a fabby strategy game, based on a great story.