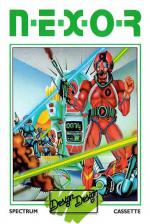 If you, like me, half believed the blurb about Nexor being the ultimate in arcade adventures, then you'll be as disappointed as I was when you finally see it. Originally titled Nemesis, it's been renamed to avoid any confusion between itself and the hordes of coin-op conversions of the Nemesis arcade machine. A good thing too; anyone buying this expecting a hot shoot'em up would be more browned off than a panful of Bisto.

In truth the only really ultimate thing about this game is the way the programmers have produced an Ultimate-style game. But unlike Ultimate's games, Nexor is poorly planned and casually executed. It's the ususal find-and-collect/push-box-to-door scenario, but it's so fiddly and prone to no-win situations that it's virtually unplayable.

Your first act as a Nexor operative is to try to cross a catwalk to safety, only to fall repeatedly down a seemingly bottomless pit. The most annoying thing about the game is the fact that you're not just pitting your wits against the evil creatures of the complex, but also against the quirks and faults in the program. This is not the way to write and addictive game!

To be playable, a game should be easy to learn, but hard to master. And to be addictive it must start off easy, and get progressively harder; your hope for success elusive but not hopeless. having that enormous drop at the beginning of the game must be one of the most dippy ideas ever for an opening screen. And to be frank, I found the rest of the game about as exciting as watching my washing going round.

I found the bulk of this game about as exciting as watching my washing going round.