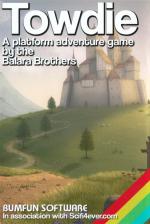 There are so many Spectrum flick-screen graphic adventures to play through that I often imagine newcomers to the scene either just choosing to play a new one at random, or sticking to what they know and downloading the next Dizzy game in that never-ending series. Towdie is a graphic adventure which obviously has been very heavily inspired by Dizzy, and something of a peculiarity on the scene as it was written by two Slovak coders, the Balara brothers. Whilst it's languished in a dusty corner of the Internet for many years, the magical land of Alkria has recently been given a new release on the Bum Fun label with a professionally translation and localisation.

What exactly you have to do isn't particularly clear. The instructions talk about "saving the land of Alkria from a fire-breathing dragon", but it's one of those games where this "saving" is done by finding object A and bringing it to character B who then disappears and opens door C to allow progression to the next room, whereupon you repeat the process. Control of the titular hero is via the regular QAOP controls and you can also use the M key to "interact" with the characters scattered throughout the game. Despite the somewhat laboured formula, Towdie is done with a lot of style. Sprites are very cartoony, and exceptionally well animated, particularly in the death sequences, and when you correctly solve one of the puzzles.

Personally I found the solutions to some of the puzzles pretty obscure. I mean, use the bellows to blow the dust out of a clock? Really?

It's also the type of game where you really need to make a map (or have an exceptional memory) to remember exactly where all the characters (a knight, a maid, a chef, etc) actually are. Some of them start to talk to you as you enter the room; others wait for you to press the M key to give you another mission.

Scattered around the screens are objects. The mushrooms increase energy and are immediately consumed when interacted with. All other objects presumably have a purpose and interacting with them will pick them up, and drop a random item once Towdie is carrying four of them. Everything looks very pleasant from paused screenshots with no colour clash despite very pleasingly rendered screens. Even the backgrounds are exceptional, with the lighthouse being a particularly nice touch. And the music which plays on interrupt is incredible - there are seven full-length tunes which play one after another. It's like having a Spectrum radio station playing in the background of the action.

In fact, there's only one real irk to the game and that's the jumping control. Usually jumping in platform games presents no problem at all, but in Towdie you cannot jump from one place to another if there is an obstruction at your feet. Yes, weirdly enough, you are prevented from jumping over obstructions if you are standing right next to them. The only solution is to turn round, walk a few steps away from them, turn around, take a run-up and then jump just before you encounter the obstruction. Whilst this does work, and with a bit of practice becomes intuitive enough, some screens become extremely difficult to walk through as a direct result. This isn't just a small problem, it causes a great deal of frustration in an otherwise quite beautiful game.

Alright, Towdie doesn't really do anything new and, if you've played Dizzy and Super Seymour and the like, it's probably not going to fox you for very long. But it's a respectable enough graphic adventure with a lot to recommend it.