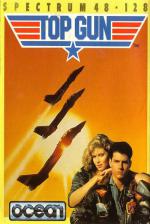 Take my breath awayyyyyy-yah!! Ah yes, the thrill of the wind whipping through my cockpit... brrr! Chilly, innit? Ever wished you could be like Tommy Cruise, whistling through the air with the greatest of ease, no safety net, a clean Peaudouce Baby Slip on, and a fresh girlie by your side? You do? Good, 'cos now you too can be a Top Gun, and fly combat missions in superfast aircraft, jus' like the real thing.

You have, at your disposal, two triffic varieties of death to hand out to the baddies - rapid-fire cannons and heat seeking missiles. To defend yourself against the baddies' missiles, you also have a starburst - a kind of flare that distracts the missile's attention.

The flight is fast and furious, incorporating some of the features of a flight simulator, and includes split-screen action. Your opponent's point of view is shown on the right hand screen, and your own cockpit view is displayed on the left.

The graphics are vector plotted line drawings, and represent the aircraft from the film. F-15 Eagles? I dunno, I can't tell an airplane from a cheese sandwich, which is why I've never been abroad. Anyway, they're nicely drawn, and they fly like the real thing mostly because the position of the ship is redrawn in 3D each time, rather than being a more crude sprite. It's a bit like a rougher version of the ships in Elite or Tau Ceti.

Lots of fun. And it's your one chance to pretend you're Tom Cruise.

The graphics are vector plotted line drawings, and represent the aircraft from the film... It's your one chance to pretend you're Tom Cruise too.