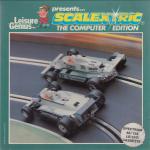 Cor! I remember this! I sat huddled with my mate in his loft, our two little cars rattling around the black track with a silver rail up the centre... Scalextric. Second fave indoor sport to Subbuteo Football, to blokes of my age anyway! Wow! Many an hour or three has been whiled away, going too fast along the track flipping my little JPS off the banked curve into the fishtank.

So now there's a computer game? Surely some mistake, you can't replace the thrill of real little cars and bits of broken plastic track by a video game. Imagine my surprise when, far from being a load of old tut, it's actually a sensible and highly playable race game.

Oh sure it's got fifteen different tracks from around the world, like all the others. And yes, I know it's borrowed most of its ideas from the likes of Pole Position. But I'm sentimental about this old corker, and I think it's a great game. The graphics are a cut above the previous games of this ilk, and the inertia and motion of the cars are a smidgin more realistic than its rivals. The thing which really puts it nose and front wheels ahead of the pack is the feature that allows you to design your own track layouts. If the world's racetracks are a bit too tame for your taste, you can bang together your own track from segments, just like the real life game.

As a bog standard race game, its reet gradely, but having said all that, there are some things I wish the programmers had incorporated. It would've been very nice to be able to flip your cars on the track at the corners, 'cos for me that was half the fun of playing Scalextric in the first place. I'm sure this wouldn't have been much of a problem, and it would've made it more like the real thing.

So, if you can afford it, buy it and enjoy. You too can be Sports Personality of the Year.

If you can afford it, buy it and enjoy. You too can be Sports Personality of the Year.