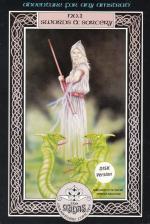 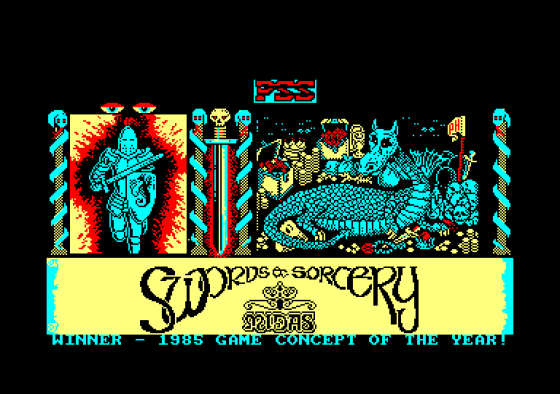 This game has taken so long from conception to actual appearance that PSS probably can't bear to think of the number of man hours that have gone into it. The question of course is whether it's all been worthwhile and whether the "Midas adventure concept" will take off allowing many add on modules to the original game.

At its simplest the game is an attempt to implement "Dungeons and Dragons" on a computer and give the same sense of role-playing. Obviously there are a number of advantages and disadvantages to putting the action on computer and the result is not the same as the real thing.

You can begin the game by creating your own playing character in preference to Flubbit the Dull with whom you will otherwise be stuck. The character can be named, trained under 12 masters in different skills and then armed at an armoury before entering the game. The character begins in a rectangular dungeon but there are three others to be discovered of the same size. 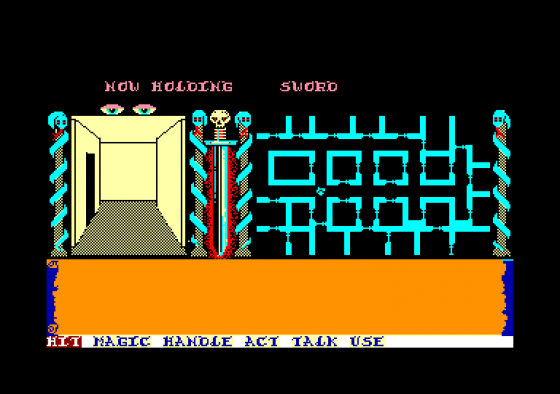 The screen on which everything takes place consists of several areas of varying importance. The actual forward view of the character in the top left is quite nice and moves reasonably well but is only of use for identifying things or people in front of you. On its right is a display where either the map of the dungeon or a status display is shown. The map shows the characters on it, excluding those concealed in rooms while the status display is used for informing you of the character's status during fights. and his magic numbers representing his skills.

At the bottom of the screen are two menus, one for conducting conversations with other characters and the other for using all the commands in the game. Conversations tend to be pretty graphic with plenty of imaginative abusive language but they can be useful on occasions. The command menus are where most of the nitty gritty takes place and familiarity with them is an important thing to learn.

There is an aim to the game for those who want one but you'll probably find that if you're going to enjoy the game you won't really need to take any notice of this any-way. Most of the action involves fighting with characters encountered in the dungeon corridors or protecting objects in the rooms. 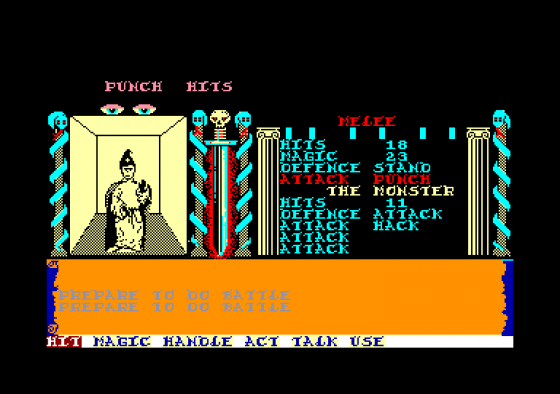 Fights take place in real time and the outcome is determined by your character's status in relation to the opponent and by what attacking and defence moves are made. Objects must be collected and have many different uses and properties that may be magical or merely practical. Amongst the items are treasure, foodstuffs, weapons and armour but you may not be aware of the full potential of what you hold.

There are plenty of hidden depths to the game that are touched on in the instructions but take real perseverance to find out about. These include the skills your charac-ter acquires, uses of objects and behaviour of opponents. To get the most out of the game you'll have to become very heavily involved and spend many hours at the keyboard - the question mark is over whether there is enough initial interest to get you that far.

The presentation, depth and atmosphere of the game cannot really be faulted. Where it loses its audience is in the initial complexity. Maybe it's meant to be like the real D and D - played by an exclusive club to which it is difficult to gain entry. No doubt it will become a much loved cult game offering endless hours of pleasure for those who persevere with it, but many people just won't want to put in the time and effort.

If Bob Wade finds this atmospheric, he's obviously pretty easy to please. The dungeon has all the eeriness, interest and character of an office block. The gameplay is a waste of effort, the grab is non-existent and the program as a whole pretty much a dead loss. If you like D&D, you'll still find this a bad game.

No problems seeing the dungeon if that's what you want.

P. Plenty of depth for those who stick with it.
P. Catches some of the atmosphere and "real time" excitement of D and D.
P. Packed with characters, objects and things to discover.
P. Original and funny at times.

N. Tremendously difficult to appreciate properly.
N. Can all too easily become an uninteresting fighting game.

Plenty of depth for those who stick with it, but tremendously difficult to appreciate properly. 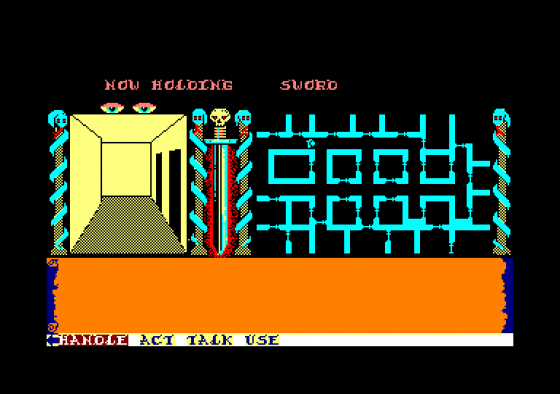 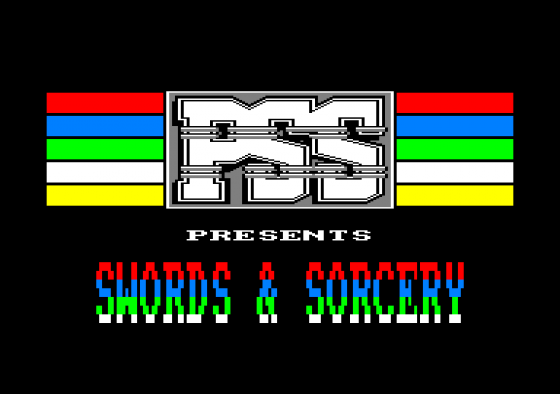