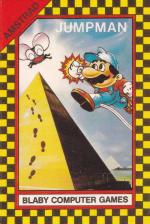 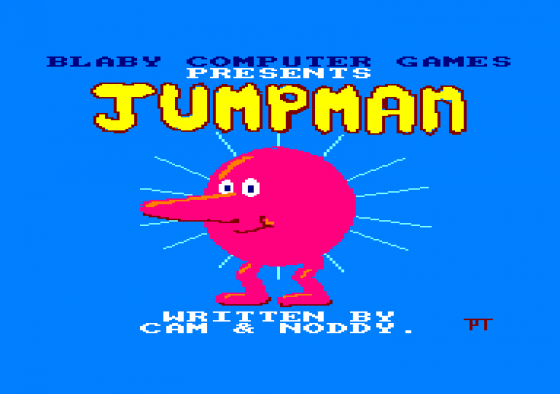 This is a version of the old arcade game Q*Bert in which you have to jump around various geometrical shapes colouring in the blocks that comprise it. At the same time you are pursued by an opponent who will terminate you with extreme prejudice if he catches you.

In this version you are called Hubert-C-Jumpman. You are a violent pink colour and are lumbered with a huge nose. Your pursuer is Felix the Flatner, who is equally pink and suffers from an equally overgrown proboscis.

You begin on a blue pyramid which hangs, like all the structures in the game, on a background of deep space. It looks very pretty, although the colours are a little on the vibrant side. As in all games of this type, movement is diagonal - you will probably find that the keys give you a better chance, as the joystick can be slightly unresponsive.

It's pretty easy to figure out the route Frank will take on this screen, so there's little difficulty in progressing to the second unless you get too enthusiastic and leap off the edge into the the wilds of space.

The next structure is almost a square, but it has some tricky holes in it to make you think a bit more about where you're going. This time, though it's yellow.

And so you go on, with different structures of different colours, bouncing around to colour each square. There are only six screens and the pursuers will increase by one each time you complete them. Jumpman is by no means a bad version of Q*Bert; the graphics are pretty slick, the sound is suitably springy and the whole thing is carried off with a certain amount of panache. But it must be said that it isn't quite in the class of Microbyte's Er*Bert. However it is a budget game. You pays your money and you takes your choice.

The character graphics are very disappointing and could have been much better with a little more colour. Control is annoying because it takes time to respond, but holding down a key or joystick direction will send you shooting off the layout. But the designs are good, and prove testing - so it could keep you at it for some time.

N. Only six screens.
N. Control can be difficult.

The character graphics are very disappointing and could have been much better with a little more colour. 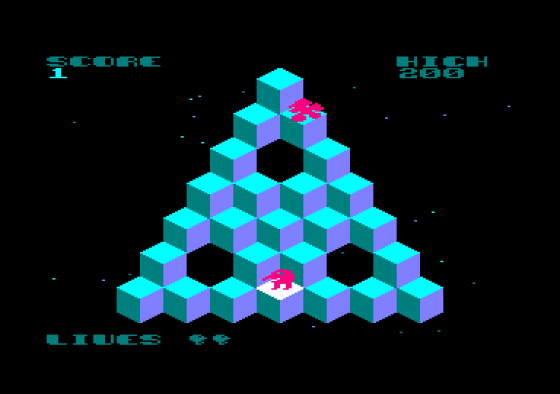