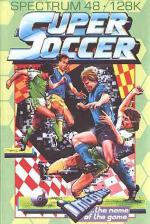 You'll ne-e-ever walk alone! Yes it's another soccer simulation on the Speccy, and I'm glad to say it's a winner.

We're in Match Day territory here, and bearing in mind that it was Ocean (Imagine's parent company) who produced that classic, you'd be forgiven for expecting the odd similarity between the two games.

In terms of sophistication, though, Super Soccer probably has the edge. There's much more variety of movement, with more ways of kicking the ball and all sorts of extra features like diving headers and chesting downhigh balls. The goalkeeper can move in virtually any direction, rather than just leaping to the left or right. Best of all, you can now foul people. Vicious sliding tackles recall the great days of Chopper Harris and Norman Hunter, though you can find yourself sent off at the slightest provocation - just like them. 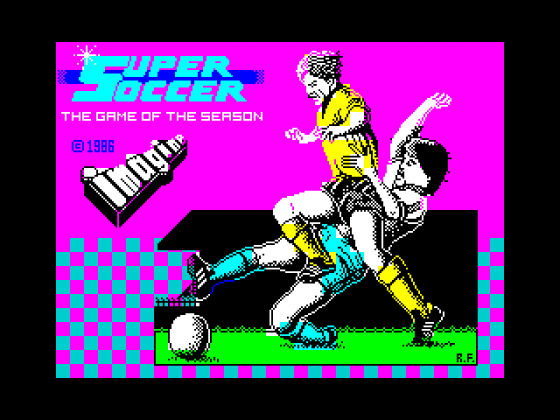 Of course, with the Spectrum. you can't introduce new features without junking some old ones, and in this case it's the graphics that've suffered. Gone are the roly-poly figures we once saw, to be replaced by infinitely weedier speciments that clearly take up much less memory.

Control isn't as smooth, either. That, though, may just be me, 'cos with all the extra tricks your players can perform, Super Soccer is a hard game to get into. It'll take a while before you start a match expecting to score a goal f'rinstance! Realising this, Imagine has laid on a practice mode, and you'll need it. Copious hints and tips are also included to stop you cracking up completely.

So. while beginners may find it a little heavy going, old campaigners at this sort of game should lap up Super Soccer. Get seven of your mates around (you can play a tournament of up to eight players) and give it a long throw-in from the touchline!

While beginners may find it a little heavy going, old campaigners at this sort of game should lap it up.