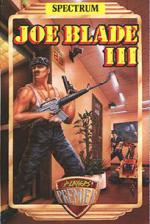 How many successful budget-only series of games can you name? Well, there are Codemasters' 'Simulator' games, but they are less of a genuine series than a load of different games with the 'Simulator' tacked onto the end. Joe Blade, on the other hand, is a genuine series - this third one being, yes, you guessed it, the third to be released - and all of them have been massively successful.

There's a good reason for this - they're rather good. Admittedly, JB III doesn't add an awful lot to the formula - Joe still finds himself wandering around the same passages and corridors, shooting people and picking things up - but, as with all the best sequels, there's just a bit more to it then the first two games. Correct me if I'm wrong, in fact, but I suspect that this third outing is a good deal bigger in playing area, as well as more sophisticated in construction, and, if only for that reason, it's far harder to finish.

Initially sceptical, I found myself drawn further and further and further into the game, almost coming to the point of no return - the Map Drawing Stage. Fortunately I pulled back just in time otherwise I'd be playing it still and there would be nothing but a white space on these two pages, but it was close. Joe Blade fans will know what to expect and will probably already have bought it. But others will enjoy it as well - it's clever, tricky and worth your attention. Recommended.

Joe Blade fans will know what to expect and will probably already have bought it. But others will enjoy it as well - it's clever, tricky and worth your attention.