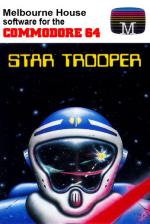 Star Trooper is yet another version of the ever popular Space Invaders/Galaxian theme. The object of the game is to shoot the enemy invaders which move from side to side and down the screen.

You control a small man with a jet-pack on his back. Movement is very simple - your joystick will move your man while held in a direction. It would have been nice if inertia had been included. To shoot the enemy you press the fire button which releases a missile in the direction you are facing.

The graphics incorporate some good scrolling effects in the background and include quite good detail on your playing man. Other than this they are fairly standard.

There is quite an interesting rhythm playing when the program is waiting for you to start the game. However, the sounds used during play are nothing special.

Enclosed with the cassette is a card which you may fill in and send away so that Melbourne House can keep you informed of any new software.

Quite an interesting rhythm plays when the program is waiting for you to start the game.