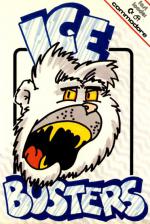 Ice Busters combines two arcade games into one. The first brings back memories of a Donkey Kong type of game -you must jump over snowballs and climb ladders to get to the top level before you can continue on to the second screen. It's a pity that they had to rip-off Donkey Kong instead of creating something original. The next screen consists of lots of square blocks of ice through which there is a network of paths. The Snow Bees move around in their direction and crush them. This may sound easy but believe me - it isn't.

The graphics are nothing to get excited about and the general presentation could be better. There are versions of both these two games already available from other software houses, in my opinion Cascade Software seem to be reinventing the wheel.

The instructions are very simple and straightforward, they assume that the player already knows what to do. I found that the F3 key will pause the game and the Fl will release it, the stop key is used to abort the current game. No mention of this was made on the inlay card though.

Play may be achieved using either the keyboard or a joystick. The game does not seem to use any turbo-loader although the inlay card claims that it does, I found the loading very unreliable and slow.

There are versions of both these two games already available from other software houses... This seems to be reinventing the wheel.
Logout