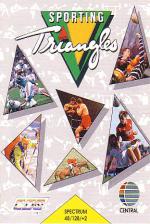 Quiz games have never really been that easy a concept to deal with on the Spectrum. They're usually licenced from other popular Quiz entities; Trivial Pursuit, Pictionary etc. And they're rarely better that their conventional counterparts.

Recently, though, virtually every quizzy game around has been linked to a TV show of some sort. We've had Every Second Counts, A Question of Sport, Bullseye - the lot.

After setting up a team of three players (human or computer, as you wish) and defining their preferred subject areas, you are launched into the game proper.

The overall aim of the game is to progress around the Sporting Triangle, landing the Question Marker on squares indicating subject areas. Different points are awarded for answering questions inside your subject area, in no-mans' "general sport" land and there are big points to be had by answering a question in the oppositions chosen area.

Now, before we go any further, I'm afraid I'll have to blow the whistle on the game's biggest fault. Get this; the quiz is split up into a number of rounds. Some are multiple choice, but the bulk of the questions simply sit there; "Which county did Fred Truman briefly rejoin in 1806?" asking for an answer. At this point, boxes with "Answer" and "pass" appear. If you haven't the fairest idea, go for "pass". Otherwise, hit the other box and type your answer.

NO! No need to type in your answer! The computer will TELL you the answer and all you have to do is announce whether you got the question right or wrong. Mad. Mad mad mad mad mad. Mad. All the answers are in the machine, so why rely in the questionable honesty of the players? Moreover, why tell them what the answer is? You'll only ever be able to ask each question once.

Madness aside, the four stages play through in similar fashion to the TV version. The astonishingly lengthy disc access time was some way redeemed by the fact that the code remained resident in our 128K machine once loaded.

Apparently the length of the load is caused by the random numbering of the questions, supposedly in order to produce a new game each time. Surely it would have been more worthwhile to include a sensible answering system.

The Hit for Six round presents Seven multiple choice answers to a question. Each time you get it wrong, the machine will give you another clue and decrease the number of points available.

The Jigsaw Picture round is similar but instead of written clues, each incorrect answer will yield a further section of a visual clue.

Sporting Triangles is a reasonable conversion of a pretty silly idea. Neither fab or poor, it doesn't deserve to be ignored, but it hardly demands attention either.

Lots of Questions. Not much fun.

Lots of questions. Not much fun.