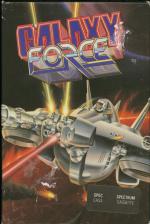 The good news? Well, the Galaxy Force coin-op is a top-notch space blast choc full of merciless aliens, spacecraft, threedimensional action and excitement. The bad news is that the Spectrum version is dreadful.

While it's technically very clever, it's unfortunately virtually unplayable.

Power Drift, from the same stable, which we reviewed last month, faced similar challenges and obstacles and managed to overcome them.

The problem with any game of this type, is that coding large, three-dimensional objects on the Spectrum is a very tricky business indeed, and once the programmer has managed to emulate a feature of the arcade game - let's take the scrolling ground for example - it's very difficult for them to opt not to include it. Often a more simple effect would have been clearer. Similarity to the original is paramount, and it often has a detrimental effect on the gameplay.

As a result, the 3-D objects in Galaxy Force are large, patterned and heavily detailed, as are the backgrounds. Put them together along with some colour and what do you get? A visual atrocity.

Since your mission is to shoot as many bad guys and enemy installations as possible, while flying down narrow canyons and through dangerous laser-riddled gateways, it seems downright exasperating that at the most tricky times, when there's most going on, you simply can't see where you are on the screen or what you're flying over.

As you fly through space, with your lasers continually (automatically) blasting, your computerized laser sighting equipment will highlight targets. Time to loose one of your homing missiles. Away it goes, taking out its target and leaving a plume of smoke in its wake.

As you bank left and right, climb up and dive down, the flawless perspective of the world around you shifts and stretched accordingly. The biggest test of the programming efficiency comes when you're flying through the maze of canyon-like walls. The speed is maintained admirably, and you can move around in your albeit tiny free space quickly and accurately, but the basic and all-defeating truth is that you can't see any of it unless you squint like mad and turn the colour off.

The bad guys are big and highly detailed, but because of the problems explained earlier, this is no longer a virtue. They have unfair camouflage.

No doubt, there will be lots of people who will maintain that it's a fab conversion, and the visuals don't really matter so long as the gameplay is there.

Disappointing conversion of a mega hit.

The bad guys are big and highly detailed, but they have unfair camouflage. No doubt, there will be lots of people who will maintain that it's a fab conversion, and the visuals don't really matter so long as the gameplay is there.