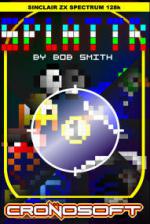 As I am sure all RGCD readers are aware that the ZX Spectrum - despite its name - did not handle colour very well. Only two colours were allowed in each 8x8 pixel square, causing many games to suffer from the famous 'colour clash' or be burdened with dull two colour palettes. Either of these situations were the source of much ridicule from C64 owners, and care needed to be taken when showcasing a game to someone from 'the other side' for fear of subsequent playground taunts.

Bob Smith has decided to embrace the colour map of the speccy to make a game based solely on the character square level. This is nothing new - many games do this, and the 32 by 24 character squares allow very playable strategy games, board games and ... anything that doesn't require fast action and scrolling. The refreshing thing here is Smith's decision to make very colourful, very large sprites out of these blocks, and then throw them around the screen with such panache and speed that they appear unlike anything else on the system. Also, by using patterned blocks he creates the illusion of blended colours. So, say hello to orange, pink and brown (if you squint).

The premise of the game is refreshingly simple: shoot some stuff and avoid other stuff. At its most basic level it plays like an f.p.s. rifle range game. Albeit a very colourful and blocky one. The bullets take a while to get to their target, and the playing area is much larger than the screen - meaning you'll need to use one of the two different radar systems to guide your sites around and hit the fast moving targets. This simple play mechanic allows for some quite pronounced variety between stages - some are frantic blasters, whilst others involve solving mazes, and there is great delight to be had in seeing what surprises each of the 32 stages hold. A two line introduction to each stage, such as 'Shoot the honey, dodge the wasps', gives a clue as to their content before you play them. Then you are thrown in WarioWare style and left to figure out what to do.

It has to be said that this game just oozes polish - from the great music/sfx throughout and choice of difficulty levels, to the redefinable keys and presentation options of radar type and animated/static backgrounds. It is obvious that this is something quite special and constructed with great care, but it is in the graphical department that this game really excels. Sprite design is fun and bold: snails, shoes, ducks, space invaders, cakes, toilets and a menagerie of other weird and wonderful baddies recall the days of Manic Miner et al, but seen under a microscope. And with more colour. Did I mention the colour?

I am very impressed with this release, and it is an excellent example of how presentation can lead gameplay, and reminds us that new ideas can still ripen and bear fruit on a 25 year old system. My hat is well and truly off to Bob Smith.

Some criticism has been levelled at SplATTR for being 128K only - but it could be argued that this is the killer app that never came, and it is now time for people to finally upgrade from their 48K machines. The other minor issues are that the difficulty is a little on the easy side, and that it actually looks better the smaller the screen is. Running under emulation on a Nintendo DS makes it an excellent fun game to dip in and out of, with lovely graphics and sound to boot. I suspect that its graphics will suffer somewhat when scaled up to a 42 inch plasma. Perhaps that's something to consider when you are inviting your C64 friends around to finally show off your multicoloured Speccy. Be sure to make them sit a long way back, or get them to take off their glasses.

SplATTR is 128K only, and is available to purchase on cassette or download from Cronosoft.

Sprite design is fun and bold... This is the killer app that never came, and it is now time for people to finally upgrade from their 48K machines.