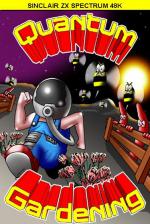 Regular readers should already know two things about me;

So when the opportunity to review his new game came up I jumped at the chance. But being the story teller that I am I have spent two months trying to come up with an interesting angle to come in from or a funny story to make the review more palatable. But that produced nothing and with deadline looming I will instead retell a tale of hero-worship, salesmanship and inebriation.

You see I first came across the game at the Retro North gathering back in August. The Cronosoft stall was situated right next to the RGCD and Weekend Gamer stands, both of which I was attempting to man in a rather drunken state (though it did help my sales pitch whilst I tried to flog GBA carts and DVDs).

Simon from Cronosoft was a very nice chap and happily allowed people to load up any of his stock to try before they buy and one of the games that was running on his Spectrum +2 was a very strange title featuring a gnome, a plant and some dice. Intrigued by the game I tried to watch it being played, only to quickly come to the conclusion that it was far too complicated and 'not my kind of thing'.

A few beers later and Mr. Cauldwell himself turned up and was introduced to all and sundry with the line '...and this is his latest game'. So the game that I had so cruelly dismissed turns out to be by the best thing to hit the Spectrum Scene in decades. Deciding to give it another go, I sat down to give the game the attention it deserved.

As it turns out, Quantum Gardening is far less complicated than it looks. By moving platforms around the single screen levels you must enable rain fall to reach a potted plant at the bottom of the screen (which in turn grows into a beautiful flower). Of course there are some creepy crawlies who will happily throw a spanner in the works, so laying and lifting platforms requires a little thought. To add some spice to the game, every so often a pair of dice will fall from the sky. Collecting the dice allows you to move along a set of large icons situated around the border of the play area and each of the icons has a different effect on the game (killing all creepy crawlies, stopping the rain etc). It is through strategic use of the dice that you can nurture your plant and quickly move through the level and onto the next.

Whilst sitting there in exalted company I was blown away by the concept of the game and with the super slick controls and exiting game-play. I immediately took three pound coins out of my pocket and thrust them towards Mr. Cronosoft, who in turned handed me a very professionally produced cassette, complete with wonderful inlay artwork. But to make the deal even sweeter, Simon offered 'do you want me to get Jonathon to sign it for you?' - Result.

It was a few weeks before I played the game again on my own Spectrum and in my sober state I was a little (but only slightly) less gushing about JC's garden-em-up. A lack of any real sound is always a bug-bear of mine (hence 5% deducted from the final score) and the lack of urgency that not having a time limit brings gives the game a slightly sedate feel, but I suppose it is about gardening after all.

Despite the minor grumbles though this is a superb game with humour and invention, two qualities that are sadly missing in so many games these days. I love the care that Jonathan puts into the presentation of his games and Quantum Gardening is no exception with its fantastic loading screen and neat touches here and there. Had he introduced a time penalty and some in-game music I would have been stopping strangers in the street to tell them about the game. As it is I will still be raving about it, but only to friends and the wise readers of RGCD.

Regretably, Cronosoft were unable to provide us with a playable demo of Quantum Gardening to include on disc. However, the full game is available direct from Cronosoft on cassette for a reasonable price of £2.99 (unfortunately there's currently no downloadable file version).

A superb game with humour and invention, a fantastic loading screen and neat touches here and there.