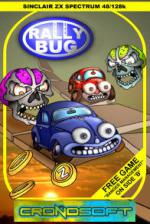 Frantic platform jumping, VW Beetles and Hangman? A game like Rallybug could only come from the mind of Spectrum guru Jonathan Cauldwell. But is RallyBug genius, or just plain confusing?

Jonathan Cauldwell has carved a name for himself as a fearsome Spectrum programmer - both prolific and diverse in his output. Here he presents us with Rallybug, a freeware title that explores the previously neglected hybrid of platforming and word-games. You drive a cute little car though a simple landscape using only left, right and jump keys. Along the way you slowly use up your petrol and try to collect 'letters' strewn about the stages. At the end of each area you are presented with a hangman section where you can use the collected letters as guesses to reveal a hidden word - but guessing an incorrect letter will cost you some more petrol. Completely running out of fuel at any point means losing a life - as does failing to complete a stage within the time limit, driving off of the platforms, or touching one of the enemies. Successfully completing a word in the hangman section rewards you with a full tank of petrol.

The game is a slight one, but shows a fair degree of polish - the scrolling is very smooth, and the car movement is responsive with a nice amount of inertia. On a 128K spectrum there is menu screen music and enhanced effects throughout. Unfortunately, all is not perfect - and one glaring problem is the mechanic of collecting the letters to take guesses. This leads to situations where you may be unable to complete a word, despite knowing it, because of the letter not being available. Losing lives by running out of petrol whilst navigating levels just to get a particular letter feels like you have been cheated by the design - which is never a good thing to say of a game. There are also a few bugs that rear their ugly heads - sound effects sometimes play incorrectly and very occasionally the play area can become graphically corrupted.

The game does have a neat trick up its sleeve though. The 'Fusion' mode - a stripped down version which does not concern itself with petrol, and just pits you against time limits for the levels whilst avoiding the enemies. The letters are replaced by point flags, and it becomes a simple score based challenge to see how far you can get. If this game sounds familiar to you, then it may be because you played it during its public debut at Retro Fusion '08 where it formed the high score competition on one of the days. Despite being very simple it is actually a more satisfying game than the 'Hangman' variant because the deaths all seem like they are your fault, rather than the luck of picking/finding the correct letters.

Although it seems discourteous to pick fault with a free game, especially one that is actually a great deal of fun - there are some niggling issues that I would like to see remedied. The game has problems with some versions of the 128K Spectrum/+2 meaning it will either not play the theme music, or not allow the selection of the 'Fusion' variant. I was surprised that this was the case, but this can be clearly seen under emulation by selecting different Spectrum models. Also, on the presentation side of things, the hangman letter picking is done using a cursor on a grid of letters, whereas the high-score name entry is done by typing the player's name in. This feels inconsistent, and slightly at odds with the otherwise glossy nature of the production.

Overall this game is quite an amusing distraction, but tainted by a questionable play mechanic and the occasional bug. Having said this, as an entertaining freebie, it'll provide you with more fun you would have imagined - especially if played as a high score competition between friends. Perhaps at a retro gaming convention. Ideally in Leamington Spa.

Quite an amusing distraction, but tainted by a questionable play mechanic and the occasional bug.
Logout