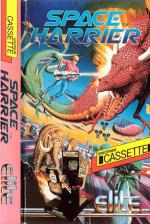 Space Hurrier would've been a better name for this one, because Elite's conversion of one of my fave blast-everything-that-moves games is F-A-S-T!

Then again, I'd also go for Space Worrier, because a mission like this is sure to give even the spaciest warrior a few sleepless nights. But let the instructions tell it like it is!

'Our hero, a seasoned veteran of many spacewars, is on the scene again. This time to save the Dragon land that's occupied by evil barbaric creatures and controlled by supernatural phenomena.'

Better get your drag on then, if you're to beat such evil creatures as fire-spitting flowers and giant stone heads. And as for those supernatural phenomena... well, Gwyn reckons they're just a dotty bit of translation from the Japanese, but they sure gave me the willies. It's yet another case of they-said-it-couldn't-be-done-ism, but take it from me., Space Hairier would've been a fitting name because you won't get much hairier action than flying across the chequerboard Dragon land. See those squares just scroll from under you as you skim across the plain to an ever distant horizon.

Those wretched phenomena are hurling everything they've got at you, and it won't do any good calling Ghostbusters! You'll just have to slide and keep your finger on the trigger as they blast you with blocks and fireballs. Our hero moves as smoothly as you could wish - but so do the deadly forces. Surely it can't be quite so perfect? After all, this is a conversion of a state of the art game with a megabyte of memory into a cramped 48K, beset by attribute problems. Well, obviously the graphics lose out. Clever though they are, at times your mono hero can get lost against the range of hills on the horizon and the rush hour surge of attackers.

This reduces the playability a bit, and maybe adds an element of pure chance that wasn't there in the original. A pity, too, that the arcade game's facility to drop in another coin and take over where you left off hasn't been included.

The sounds good though, lacking only sufficient amplification. The only other thing that I can think of that's missing is the famous moving seat. However, here's a playing tip that even Hex Loader hasn't considered. Take one YS office chair and one screwdriver. At the base of the chair you'll find four screws. Remove three of them. There you are - all the movement you could ask for. Just remember to replace them before T'zer sits... CRASHH'!!

They said it couldn't be done, but take it from me, Space Hairier would've been a fitting name because you won't get much hairier action than flying across the chequerboard Dragon land.