﻿ The Race Against Time (Codemasters) Review | Your Sinclair - Everygamegoing 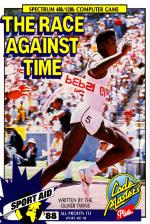 The Race Against Time

Probably the single biggest problem facing a reviewer is how to handle charity games. Inwardly you may be groaning at their gottiness - but you're loath to voice your criticisms because you won't just be stopping some fat cat lining his pockets - you'll be stopping cash filling the coffers of some worthy cause!

That in mind, it's nice to report that there are no such reservations about this year's charity biggie at a budget price. While you'll have to wait till September to pound the pavements in the Sport Aid fun run, you can indulge in some micro athletics - with all profits going to the needy.

Surprisingly enough, Race Against Time isn't a joystick jiggler in fact it's really a test of mapping and mental skills - an arcade adventure set in five continents (not five incontinents, dummy), featuring Omar Khalifa, the leg-endary Sudanese runner (and what legs, indeed), who has to run from his tiny village, lighting Olympic beacons and raising Change The World flags (I'd like to change it for a larger size, please).

All this running takes you right around the globe. and as even Omar ain't expected to walk on water, there are airports to find. Reach the Departure Lounge and you get to choose your next destination on a map - and don't worry about smoking or non-smoking - your Olympic torch means you're in the former!

There are other problems though, as you hot foot it with your flame. Any sort of water will turn your bright torch into a sizzling squib, so you've got to stay dry at all times, which isn't easy when there are rivers to cross and fountains to avoid, to say nothing of sudden showers.

As always in an arcade adventure, help is at hand in the shape of certain unlikely objects which have been scattered around the cities of the world. For example, you can turn off a fountain with a spanner, but as the former's in Rome and the latter's in Asia, let's hope you've not left home without your travel pass!

You'll also have to move pretty fast, because starvation waits for no one, and you only have five minutes to complete your quest. *Five minutes*! Well, not quite, because you can pick up hour glasses to gain an extra couple of life-saving seconds, and you'll need them.

This isn't the most difficult program you'll ever pick up or the most original. But it's good solid entertainment as you race around the world in 80 ways, taking in the backdrops. And if you wait long enough there's a Spectral version of Peter Gabriel's Games Without Frontiers to accompany the demo mode.

I could say that this really is a game to give you the runs, but a lavatorial pun somehow seems out of place here. To the starving children of Africa, diarrhoea ain't no joke. So like Saint Bob would say, "This game saves lives. $*!*ing buy it!"

A more than competent arcade adventure with varied backdrops - buy it and do some good while you play.

The Race Against Time

A more-than-competent arcade adventure with varied backdrops - buy it and do some good while you play.