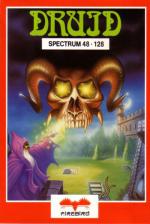 An owl calls in the night. The mistletoe twines around an old oak in the clearing. Suddenly a prolonged shriek cuts the Celtic mist! Rachael is loading her Spectrum again!

While we're all currently gaunt-less, everyone is throwing down the gauntlet and producing multi-player games. Everyone, it seems, except Firebird who doesn't appear to think that we Spectral types have friends. But more of that in a minute. Meanwhile, back in the clearing.

Dressed in her white robes, bewitching Rachael takes charge of Dafyd the daffy Druid and guides him through the labyrinthine woods in search of mystic caskets. A-maze-d at the fact that the trees form such sharply defined passages, there's little time to think as ghosts, ghouls and crawlies of the creepiest kind bamboozle our bearded bard.

Luckily our holy man is armed with an arsenal of elemental spells. This is a real pain in the arsenal for the supernaturals who can only hover around sapping strength and getting zapped.

But it takes a little science to survive as a druid. Some spells are better suited to certain foes than others, so if you don't want to waste time and energy, find out what swots what.

Our be-robed Rambo doesn't pack an endless supply of magic either, but by searching out a well-slacked chest he can replenish his three missile spells or stock up on specialities, such as Key or Chaos.

This is where the second player comes in. One spell is for Golem, a big dumb wandering brute who acts as reminder to our hero. Big and dumb... oi, Gwyn, cm'ere! But hang on... the two player option isn't available on the Spectrum. You can only control Golem in the auto mode, with Wait, Follow and Send commands. Better Send boyo away and struggle on.

Nope, it just doesn't work! I've seen this on the Amstrad and it's a lot of fun with a friend bopping the beasties, but playing with yourself just isn't as satisfying. For one thing, you've not got time to order Golem into a suitably offensive position. It's all rather Gauntlet... but without the - let.

Quite why Firebird failed to include the two player option I have no idea. Perhaps now it's seen that the Plus Two includes two joystick ports it'll think about updating it. Because until it does, I don't wish to be ruid, but Druid lacks any sort of magic.

I've seen this on the Amstrad and it's a lot of fun with a friend bopping the beasties, but playing with yourself just isn't as satisfying. Quite why Firebird failed to include the two player option here, I have no idea.