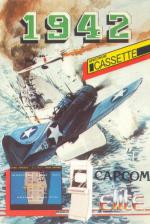 1942 - almost my IQ. Also a machine that inhabited a pub I used to haunt. though it looked fun, I never actually tried it. Now, at last, here's my chance to experience Hell in the Pacific... or rather, in my own front room.

Let's just say that as arcade conversions go, this one doesn't have the most sophisticated plot. It's only about one step up from Space invaders. The enemy has a variety of flight patterns, but in the long run it comes down to one simple philosophy... shoot everything that moves!

With the squabble in the South Seas hotting up, the USAF calls on you to boldly go where no-one else is mug enough, into the heart of the enemy forces to waste their war effort. There you'll find installations that you can instil with the fear of God as you fly over them. They're defended by every type of aircraft under the Rising Sun. Yes, this is really one for the plane spotters among you!

You'd better harbour thoughts of revenge for Pearl Harbour, because these are the oriental airforce's finest officers pledged to die for their country. You'll be flying by the seat of your cami-knickers if you're going to avoid these kamikaze kowboys.

Still, there are always the POWer capsules to help you avoid becoming a POW. You can pinch these projectiles when you shoot up certain planes, and they'll give you extra guns or maybe act as smart bombs, if you're smart enough to grab 'em in time.

What makes your progress across the scrolling seas of South East Asia such fun is just how well balanced 1942's gameplay is. The planes follow each other in wave after wave - honestly, it's worse than a Chelsea hair salon. The constant swooping of the enemy forces you to shoot fast and accurately, or you'll soon find your airspace jam-packed with Japs. There's a nip in the air, as they say. Luckily you can dive and roll, but beware of coming up under a Honda or Sony, or whatever the Japanese flew in WW2.

You'll also soon learn where the next attack is coming from, which lets you build up a strategy. Be prepared for the bigger planes which take more shots to destroy. And flak me, if you don't have to avoid their shells as well. With 32 levels to go, this should keep you in the air for quite a while.

Maybe Elite has produced better conversions, and this suffers from some dodgy collision detection. But even though there are quite a few good shoot 'em ups around nowadays, this rates up there in the air. It's a classic case of the just-one-more-go game.

Even though there are quite a few good shoot-'em-ups around nowadays, this rates up there in the air. It's a classic case of the just-one-more-go game.