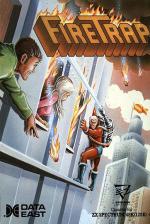 Come on, baby, light my fire. Is that a towering inferno or are you just glad to see me? Flamin' 'eck, no! It's a coin-op conversion, hot foot from Data East, and if you don't grab your hosepipe and start sprinkling, soon the whole city will have gone west!

Seems you're the only volunteer with the sheer muscle, the steely courage and the necessary head for heights so they've strapped the extinguisher to your back and sent you to the top floor of the skyscraper on a major rescue mission. Just one problem - you're expected to scale the outside!

Luckily the window ledges act like steps, allowing you to ascend and sneak sideways, but there's a slight problem of debris dropping from above... and I don't mean pigeon prezzies. Everything from desks to giant apples topple from the top.

Then there's the risk of spontaneous combustion. Goodness gracious, great balls of fire - if you're passing a window when it flashes out, that is. You'll need your water cannon to squirt out the flames and a more conventional shooter to shatter the solid junk as it falls.

Now I don't want to pour cold water on a potentially hot program but while this is addictive for a while, the fun soon burns out when you realise that the best way to boil up your score is to ignore the victims and just race to the top, blasting everything that falls.

I also got rather queasy about a game which shows arms waving as their owner is engulfed in flames. Perhaps it was because I reviewed it just a week after thirty people died in the Kings Cross tube fire. That sort of thing tends to stifle your sense of humour.

But even ignoring the taste factor, Firetrap is limited in lasting addictiveness - and the high score table doesn't even behave properly. So you won't be burned if you buy it - but it won't set your Spectrum alight either!

A disappointing shoot and dodge game in dubious taste, with little to make you load it again.

A disappointing shoot and dodge game in dubious taste, with little to make you load it again.