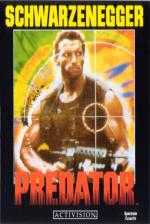 'Schwarzenegger! Predator!' it wouldn't sound quite the same if his name was Norman Shufflewick, would it?

But how tough is big Arnie? So tough that those South American, snivelling, commie-backed Sandinista freedom fighters... whoops! enemies of democracy and the American way (secret air-strikes and CIA subversion), don't give him any problems. It takes a fully fledged alien John Peel to set his pulse racing.

Not so for poor, seven stone reviewers though (You - seven 'stone?!! - Slimming Ed) who get sand kicked in their faces by humble rubber keyed Spectrums. Dontcha just hate games where the preliminaries take longer than the actual playing? Before you've had time to empty your rifle the 'Game Over' message is mocking your efforts.

Predatorwas a groovy movie which kept me on the edge of my seat (I was sharing it with Gwyn at the time... but that's another story), and this tie-in goes all out to capture the mood, starting with an animated pre-credits sequence where the alien ejects towards earth.

To get the effect takes a staggered load, but it's very pretty and probably worth it. Then it's into the jungle for part one, the enemy encampment. If you've seen the original you'll know that it starts like any old mission, and the program begins as the troops slide down from the helicopter and run off into the jungle.

Last one out is Arnie (meaning he has to do the washing up when they get home). Now it's time to yomp into the advancing enemy, wasting them with extreme prejudice as best you can. To make it worse, every so often the screen changes colour, like your telly's tuning has slipped, as the alien tries to target you.

Apparently this is all a preamble to a couple more loads, when you take on the alien in single combat, calling for hand to hand skills plus a lot of strategy. I say apparently because I couldn't get past the enemy camp.

Now it may be that I'm just a hopeless girlie - and I'll arm wrestle any one of you worms who dares write in and second that! - but I'm always suspicious of a game where sometimes I do quite well and others I die almost immediately, without quite knowing why. It suggests to me that random elements outweigh true tests of skill, which should surely have been sorted out in play-testing.

It's a pity, because the graphics are great, with a lovely little Arnie sprite - if a little Arnie isn't too much of a paradox. Even his arm muscles pump as he pounds along. If only I was able to keep him alive for longer.

Perhaps real heroes will walk through this one like they'd got nine lives... but i can't help feeling that its main attraction will be for hackers looking for infinite lives.

Great graphics, but too tough to get to grips with when sudden death sneaks up at every opportunity.

Great graphics, but too tough to get to grips with when sudden death sneaks up at every opportunity. It's a pity, because the graphics are great, with a lovely Arnie sprite.