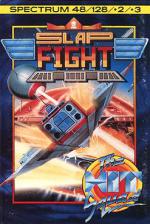 Slapfight! Wotta classic! I can't remember whether it was actually an SU Classic (TM), but it's certainly a they-don't-make-them-like-that-any-more type title which should appear in everyone's collection. This budget re-release is the ideal opportunity.

Slapfight was one of the original weapon-collecting shoot-'em-ups; unlike later titles such as R-Type, it's vertically-scrolling, but the Spectrum version is creditably fast and furious, and the assortment of aliens is well hard.

It's like this. You pilot the Slapfighter (stupid name, great little ship) as it weebles around the vertically-scrolling monochrome background which fills up two-thirds of the screen. Waves of aliens attack from all directions - the attack waves are very predictable, so part of the challenge is just learning the patterns. The backgrounds feature enormous fortifications, walkways and ramparts, but there are no obstacles to crash into, just furiously-firing aliens. Keep moving to avoid their fire, zap them and pick up any stars which appear. As you collect more of these, the feature indicator at the side of the screen increments; hit the space bar to activate the feature. You should definitely activate a couple of SPEED icons, but any more than that and your ship seems to fly around the screen uncontrollably.

Other icons include a side-gun which shoots sideways, a wing-gun which adds powerful forward-firing missiles, a forward-firing bomb, a long -range laser, and my favourite, the homing missile. Select this and up to eight missiles at a time burst from your ship and demolish anything on screen - trouble is, you can't fire again until all the missiles have found a target.

There's also a defensive screen which lasts for a variable time depending on how many hits you sustain.

There are some fab end-of-level guardians, the first one of which is pretty slow and lumbering and easy to take out. There are also despicable little scuttlers which run along platforms and shoot you from junctions unless you pick them off first.

Adequate bleepy sound and a two-player option add up to a real bundle of fun. Get it at once.

Classic shoot-em-up action; miss this and you're a dead anchovy.

Classic shoot-em-up action; miss this and you're a dead anchovy.