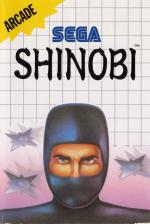 If you hankered after the Shinobi coin-op then hanker no more... Sega has converted it to its console format. It comes on a two mega-bit (256K) cartridge and it is a one-player game.

Ninja Kids have been captured by Ninja outlaws and they are being held hostage in various parts of a city. You have to rescue them using your Ninja skills, there are five missions with three to four stages in each. You can punch, kick, throw Shuriken blades or use a sword.

The game starts with an amazing piccy of a Ninja with his eyes flitting from side to side, very realistic. On pressing fire, you are presented with a map of the city and a little box over the area you are in. Then you go into the game.

You can walk left/right against the scrolling backdrop and the action can take place over two levels. You can switch between levels by pressing both buttons down and pushing up or down to scroll to the upper/lower level.

The kids are situated throughout the level and are protected by various types of Ninja, your best weapon is to throw darts at them or to drop down into a crouch or leap high and release a dart to take hidden Ninja out. There are enemy Ninja hidden behind barrels, sitting high up on walls and some have defensive shields to deflect your darts.

If you are hit by the enemy you lose energy, if your energy gauge hits zero you lose a life.

Hidden amongst the power-ups are bonus rounds, here you can whack up some score by throwing darts at Ninja which are running across two platforms in the distance (very Disks Of Tron), when the round is over a Ninja jumps at you filling up most of the screen (Lovely effect!!).

At the end of each stage is a biggie to kill, this brute is a hard beast, he throws blobs of what look like sick at you have dodge them and try to take him out before he does you. If you succeed you advance to the next round.

Graphics are well defined and colourful, sound is good and the gameplay is excellent, it just rolls off your fingers into the joystick, the moves become instinctive after a short while and this leads to some very satisfying play...

Graphics are well defined and colourful, sound is good and the gameplay is excellent... The moves become instinctive after a short while and this leads to some very satisfying play.